March is Women’s History Month, and this year’s theme is “Providing Healing, Promoting Hope.” Attend a lecture given by #BlackLives Matter Movement co-creator Alicia Garza on March 2 or celebrate at the Erb Memorial Union ballroom with authentic international food and cultural and educational performances at the International Women’s Day event March 7.

Interested in learning about animals? Learn about endangered animals at the opening of the Museum of Natural and Cultural History’s “National Geographic Photo Ark” exhibition or attend the museum’s monthly Ideas on Tap pub talk where the of role pheromones in the mating practices of snakes will be revealed.

In celebration of this year’s Common Reading selection, “Braiding Sweetgrass” by Robin Wall Kimmerer, “Plant Dyes in Artists’ Books” will allow visitors to explore and handle books made with plant dyes. The pop-up exhibit will be in Lawrence Hall on March 1.

If you love animals, you’re in for a treat on March 5 when the “National Geographic Photo Ark” exhibition opens at the Museum of Natural and Cultural History. This bilingual English-Spanish exhibit includes photographic images, interactive stations and videos of endangered animals from around the world. Visit the museum and learn more about weeklong “Photo Ark” opening celebration activities for all ages.

UO Libraries presents “Open Scholarship from Across the Disciplines,” a virtual digital exhibition that celebrates the scholarly achievements of Black faculty members and students from the UO.

“Common Seeing: Meeting Points” has been added to the collection of virtual tours at the Jordan Schnitzer Museum of Art. A visual arts extension of this year’s Common Reading program featuring Robin Wall Kimmerer’s book “Braiding Sweetgrass: Indigenous Wisdom, Scientific Knowledge and the Teachings of Plants,” the exhibition brings together works by nine contemporary Native artists.

“Remember This: Hung Liu at Trillium” features Chinese American artist Hung Liu’s colorful works that focus on the forgotten, the poor, the afflicted and the displaced, elevating individual dignity and individuality with a poetic, dreamlike quality. The exhibition in the museum’s Barker and Soreng galleries runs through Aug. 28.

Mark your calendar for March 7 for the International Women’s Day Celebration happening at the Erb Memorial Union ballroom. Honoring women and celebrating global cultures and strides toward gender equity and international peace, the event will feature international food and cultural and educational performances from the UO community.

Return to a world of two realities with “The Matrix Resurrections” as Ducks After Dark kicks off the month in the EMU’s Redwood Auditorium on March 3.  Free popcorn and soda and free entry for UO students with a valid UO ID.

Le Club Cinema will be screening the 2007 computer-animated film “Ratatouille” on Mar. 9 in the Yamada Language Center in McKenzie Hall.

On March 4, drop in to the EMU and make a collage at the last Freebie Friday event of the term. Do your crafting at the O Desk between noon and 2 p.m. or take home a prepackaged kit that includes a canvas, magazine clippings and glue.

Join Oregon State University biologist Robert Mason live on Zoom and Facebook on March 2 for “Snakes, Sex and Scents: The Garden of Eden Revisited,” the Museum of Natural and Cultural History’s Ideas on Tap monthly pub talk. Learn about pheromones, considered nature’s love potions, and the role they play in the mating practices of red-sided garter snakes.

Jazz Combos, an integral part of the jazz studies program, will give students a chance to showcase their work on March 4. The winter term UO Horn Studio performs March 11.

Join Future Music Oregon on March 5 for a new media performance using computers and other technology to create expressive music and compositions.

Can’t get to an event in person? Learn about the many contributions women have made and celebrate Women’s History Month virtually at the Library of Congress site, where you can view exhibits and collections, images, audio and video and more. Browse dozens of virtual exhibits at the National Women’s History Museum.

5 Classical Music Albums You Can Listen to Right Now

Wed Mar 2 , 2022
Bruckner: Symphony No. 7 Gürzenich Orchestra; François-Xavier Roth, conductor (Myrios) Anton Bruckner, modernist trailblazer? So thinks François-Xavier Roth, one of the more inventive conductors working today. Roth has been working on a Bruckner cycle with his Gürzenich Orchestra in Cologne, Germany, of which this is the first evidence on record. […] 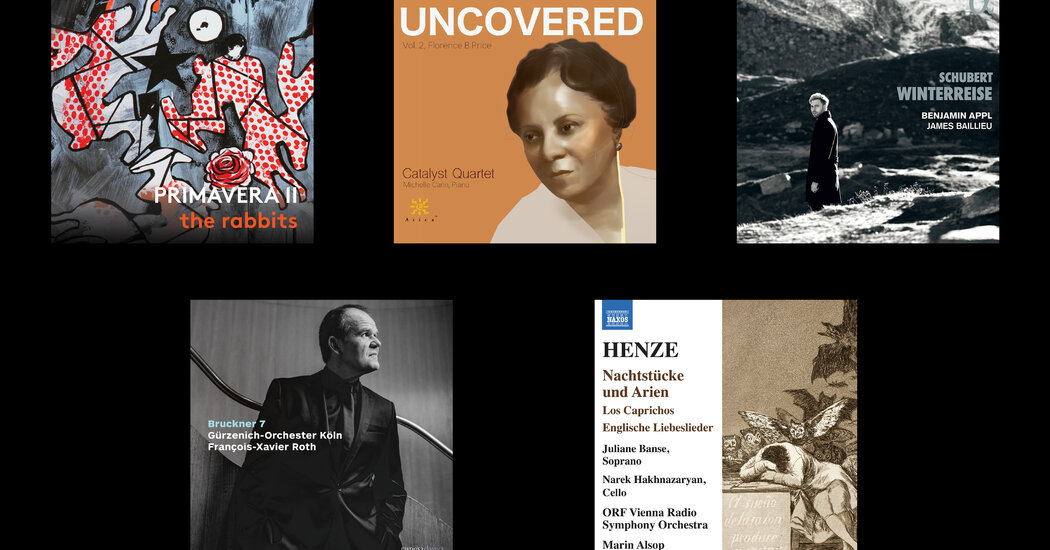