DONETSK REGION, Ukraine — Not many rock stars wear flak jackets to a show or pick a gloomy industrial warehouse as a venue.

But Sviatoslav Vakarchuk, Ukraine’s biggest rock star, was also not playing to the usual audience Monday.

At a temporary military base inside a factory building near the Russian front in Donbas, Vakarchuk sank into a battered office chair, unpacked an acoustic guitar, and poured out folk songs and pep talks to dozens of Ukrainian soldiers who had just returned from hellish fighting or were headed back in. He sang for at least 40 minutes and took almost as long to depart as soldiers mobbed him for selfies and autographs.

“It’s pretty cool. I’m impressed, actually,” said Lt. Stanislav Kyslov, who a few days earlier had been part of a nighttime troop transport that came under fire after the convoy was detected by drones.

Vakarchuk, 47, has been described as Ukraine’s Bruce Springsteen. He has long mixed music, social justice and national politics, including serving two terms in the Rada, Ukraine’s parliament.

Known simply as Slava to his fans, Vakarchuk, frontman for the band Okean Elzy, has stripped down his music to little more than an impassioned and raspy voice and launched a solo tour to rouse his country’s spirits in the war against Russia.

Ukrainians seemed all the more stoked about the power of music to inspire and unite after the Ukrainian group Kalush Orchestra won top honors in this year’s Eurovision Song Contest.

Vakarchuk performed for workers Friday in the control room of the defunct Chernobyl nuclear power plant. Between several performances Monday for military personnel, he stopped in Bakhmut to shake hands with postal workers still getting the mail out in contested territory, only hours before a Russian missile struck a residential neighborhood in town.

His one-man road show has connected him all the more with Ukrainians, especially soldiers who have defied all expectations in beating back Russia’s might.

Latest updates from the Ukraine war

The Ukrainian military granted access to Washington Post journalists at a forward base about 25 miles from the front lines on the condition that its exact location not be identified. A spokesman for the unit — the 24th Separate Mechanized Brigade — also declined to say how many troops were stationed there.

The temporary base was close to several Russian attacks Monday, including the shelling of what was reported to be an ammonium nitrate depot and the airstrike in Bakhmut, which left a crater 40 feet in diameter and heavily damaged an apartment building.

During his performance, Vakarchuk (pronounced va-kar-CHOOK) urged Ukrainians to remain steadfast at a time when the momentum of the war appears to be shifting in their favor even as it intensifies in the east. He said Russia had attacked Ukraine because it fears being infected by the “freedom gene.”

“But we need to endure,” he told the soldiers. “I am here to tell you that the whole country is proud of you. You are incredibly cool. No one believed that Ukraine could be like this. But today, I believe that Ukraine is a country supported and admired by the whole world.”

He addressed some remarks to Russian soldiers, appealing to their conscience and urging them to resist further participation in a war already marked by widespread destruction and alleged war crimes.

“We can see Russian prisoners of war who say, ‘I was just following orders,’ ” Vakarchuk said. “I want to say only one thing: Either you change the government that gives you those criminal orders or you are accomplices to the crime.”

Then he began to play. Some soldiers sat on steel trusses or other scrap metal. Others stood on pallets stacked with body armor. Some soldiers sang along, and many whipped out smartphones to make videos.

The showstopper was “City of Mary,” a song honoring the besieged Ukrainian fighters inside the massive Azovstal steel plant in Mariupol as they ended their weeks-long stand. Vakarchuk said he had never been able to write a song on request until Sviatoslav “Kalina” Palamar, the deputy commander of the nationalist Azov Regiment, asked him to.

“Imagine their situation now: the difficult conditions, a lack of medicine and a bunch of wounded people, a lack of food and water, a lack of ammunition,” Vakarchuk told the soldiers. “And he wants me to write a song. At that moment I realized that a real warrior is different from a mercenary with a weapon, in that he fights with his heart.”

Will not shatter my dream

My heart will never betray its faith

The righteous city of Mary.”

Having strummed its last chords, he was thronged by soldiers.

Anatoliy Shipanovskiy, a huge fan who reenlisted in the military the day after Russia invaded, grabbed a spot in the front row. He said he and his wife, Iryna, have attended just about every one of Vakarchuk’s concerts near Lviv, their hometown. They even bought advance tickets for a concert later this month, which is not likely to happen now.

Even before he called his wife to say that Vakarchuk would be performing for his unit, Shipanovskiy knew she would be wild with jealousy.

“Well, come on!” he recalled telling her, as soldiers crowded around for selfies and autographs, many of which went to friends and family in villages back home or right onto social media.

“Sviatoslav, he has a big mission with his songs, with his motivational speech,” said Kyslov, 36, the lieutenant whose convoy came under fire.

Kyslov said Vakarchuk, with his varied career and his stature now, seems to embody something unique for Ukrainians, and his performance near the front seemed like an especially useful way to reach soldiers in his unit from Donbas. That region in eastern Ukraine has neighbors, and sometimes even families, who have divided loyalties between Russia and Ukraine.

“A lot of them come from small villages, small cities, and they need additional motivation to support the whole country,” he said.

Sat May 21 , 2022
Meow Wolf, familiar to many Texans who visit Santa Fe, is coming to Texas. The award-winning arts and entertainment company that creates immersive, interactive experiences is planning two permanent exhibits in the state. Meow Wolf will open in Grapevine Mills next year and in Houston’s Fifth Ward in 2024 in […] 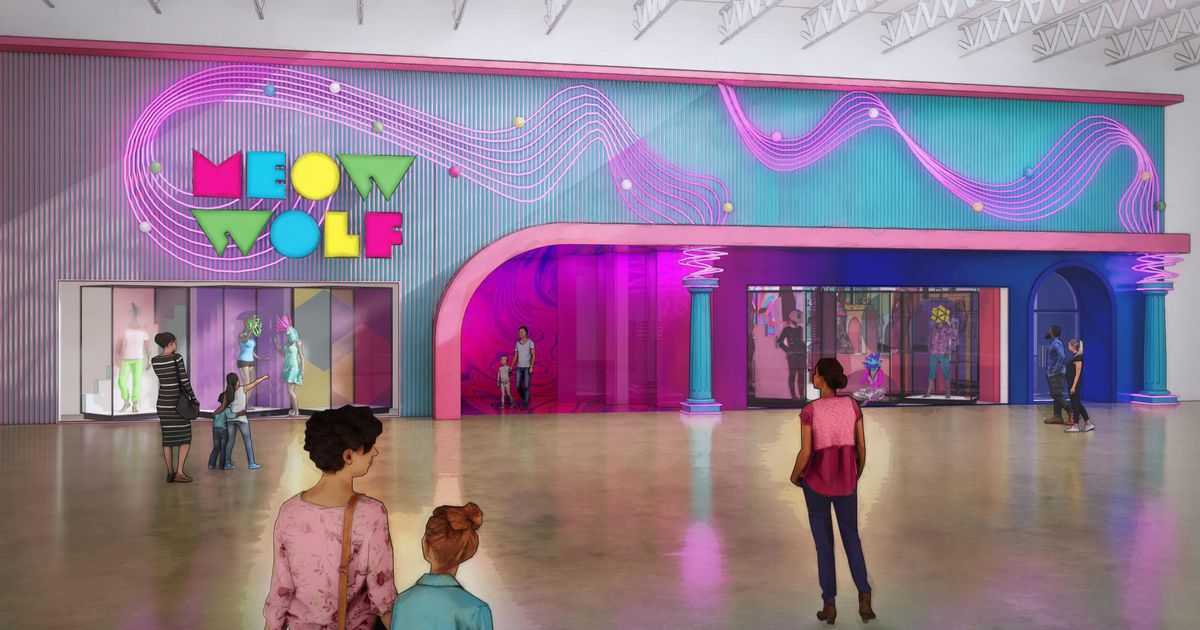