The partnership is a big shift for both the festival, which took a for-profit turn in recent years, and the nonprofit, which is broadening its focus, building its revenue sources and expanding into live music for the first time.

Youth on Record executive director Jami Duffy will be co-managing the festival with Casey Berry of Two Parts under a new company, UMS, LLC. Two Parts, the experiential marketing company that bought the festival from the nonprofit Denver Post Community Foundation in 2018, has added higher-end food, drinks and immersive art to the UMS and diversified the lineup, hoping that expansion would turn a profit. During the pandemic, doing so has been tough.

With Youth on Record’s fundraising acumen, the UMS plans to expand and raise $200,000 from donations and foundations to pay for rising expenses that ticket sales, corporate sponsorships, merch and concessions don’t cover.

So how did a nonprofit that focuses on music education for youth buy a festival?

Youth on Record bought a minority share in UMS with some of the $1 million philanthropists MacKenzie Scott and her husband Dan Jewett gave the organization in June.

Scott, who divorced Amazon founder Jeff Bezos in 2019 and is one of the wealthiest people in the world, donated $2.7 billion to 286 organizations last year in unrestricted funds that nonprofits can use in any way they see fit.

When Scott surprised Youth on Record, the nonprofit decided to put the money toward its “big idea” — a long-game strategy to create a musician middle class in the United States, something Duffy said has been missing.

The event was founded by former Denver Post journalists Ricardo Baca, who has since moved into marketing through his agency Grasslands, and John Moore, who is now a reporter for the Denver Gazette.

“When the UMS started, it was a festival for the indie bands that lived in Baker. It was a very white festival. It was a very male festival,” said Stephen Brackett of Flobots, who co-founded and led the board of Fight With Tools, which eventually turned into Youth on Record. Now he works as its director of innovation and incubation. “Two Parts has gone very far in changing that story. And so also what that means is that since it’s not just representative people who live in Baker, it’s a bit more representative of the city of Denver.”

From the beginning, UMS has been a must-play fest for up-and-coming local bands and a magnet for national talent, too.

Even when COVID-19 forced the festival to cancel its in-person event, the organizers created the Underground Music Something. This online festival got cash into artists’ hands in a time when many were out of work and unable to book concerts.

Both UMS’s reputation as a legacy festival and its commitment to innovation and higher rates for artists appealed to Youth on Record as its leadership weighed whether to get into the festival business at all.

There are plenty of reasons not to go into music festivals or live music booking. Risks are high, and rewards are far from guaranteed. Though UMS has been running a long time, it’s been a struggle for Two Parts to break even.

“It’s been a fight, to be honest,” Berry said. “We’ve definitely put in a lot of time and money to get it to where it’s at now. I mean, when we took it over, we weren’t really sure what we were jumping into but had a lot of big dreams. We definitely put together that three-year investment plan. The first year kind of loses some money, the second year breaks even, and then 2020 was supposed to be our big chance to see our vision and our approach come to life. But, you know, the world had a different plan for us for 2020, but we still kept fighting.”

For Youth on Record, the value of music festivals isn’t just their ability to make money — though what nonprofits call “earned revenue” is a perk.

“The reason we picked a festival as our first inroad into ownership is when we look at the impact Youth on Record wants to have,” Duffy said. “Music festivals have the highest concentration of people. And our job is to serve the community. And our job is to support building the music ecosystem of the future. And so we were looking around at where are the highest number of musicians and music fans. And they’re at music festivals.

“The music festival that Stephen, our founder and so many of the folks that worked for us have played is, of course, UMS. We go every year. We never miss it. It’s a part of our culture at Youth on Record. And so yeah, we decided to take a risk.”

Duffy approached Berry and Two-Parts and asked if UMS was for sale. He said no. But Duffy and Berry began talking about where their interests might overlap.

“I was kind of intrigued as to see what the nonprofit model was and what their mission was,” Berry said. “And they were looking to engage in a lot more of the consumer-facing access to artists.”

Duffy and Berry also commiserated about what it was like to run organizations — albeit quite different ones — and eventually decided to join forces.

“I said, look, we as an organization are wanting to focus on art, impact and economy moving forward,” Duffy recalled. “And by art, we mean: How do we provide more opportunities for musicians, more training for musicians? How do we get them the services and support they need? What we’ve done really well at Youth on Record is with young creatives ages 11 to 24. But beyond that, how can we really focus on creating more and better art and supporting and building musicians?”

Ultimately, both groups decided a team effort made sense.

The festival, which runs from July 29 to 31 this year, won’t be radically reworked.

“Our vibe, it’s always changing,” Berry said. “We have an amazing foundation. Go to UMS. Trust it’s going to be great. You’re going to discover amazing artists. But then when you go, we like to inject a lot of surprise and delight, unlock a lot of really unique and cool bands.”

While national headliners drive some ticket sales, he hopes people will check out local artists and bar shows — the events that have made UMS such a significant part of the cultural fabric of Denver.

This year, Youth on Record will be booking an Impact Show, which will focus on mental health issues. The nonprofit often has people set up donations in memory of someone who recently passed away — sometimes as many as 15 in a year. Most of those people had died from substance abuse or by suicide. Duffy’s hope is that the show will help people connect with help.

“You can go as a music fan and hear this show and not only be inspired and feel less alone about maybe your own mental wellness journey and struggles,” Duffy said, “but then you can just turn around, and there are some resources for you.”

Youth on Record also hopes to bring sober bars to the experience, where people can get non-alcoholic cocktails. Both she and Brackett don’t drink and find their standard booze-free options lacking at most music events.

And the festival will be offering musicians two days of professional and personal development, which Duffy described as “the best green room you’ve ever been to.”

UMS plans to continue to support local businesses, venues and restaurants on South Broadway — even as that neighborhood has changed radically in the two decades the festival has been running.

These days, the neighborhood is less gritty than it once was. There are more swanky apartments and condos, national chains and high-end restaurants. While rising rents have pushed out cherished businesses and longtime neighbors, newcomers have arrived in droves and brought their own cultures.

Duffy herself lives in a South Broadway condo and is eager to connect with the newer residents in the neighborhood.

“When I see all kinds of new stuff going up in there, my mind immediately goes, I want to get those people to go to UMS, because I want those people on our side,” Duffy said. “All the folks moving there, all the businesses moving there, all the newcomers — if UMS can be part of their culture of being a resident of Denver, that means that they’re on our side. That means they care about local artists. They care about local issues. Or they’re invested in mental wellness. They’re being generous with their dollars, right?

“Because if we don’t get them, somebody else is going to get them. And so that’s my mentality about it,” Duffy added. “The more that UMS grows, the more we integrate more people, the larger our social capital becomes.”

Sat Mar 26 , 2022
The weekly arts and crafts fair at Huntington Beach Pier Plaza will be undergoing a transformation in future weeks as it is taken over by the Downtown Business Improvement District. The Huntington Beach City Council approved a service agreement with the Downtown BID at Tuesday night’s meeting by a 6-0-1 […] 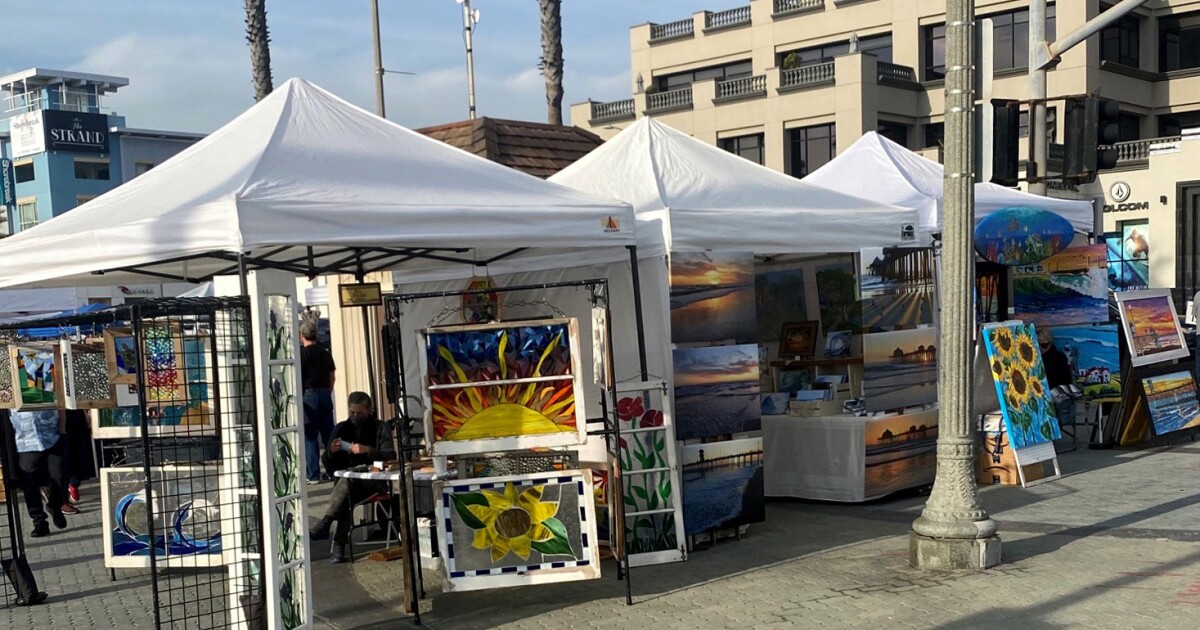