Not only is Maria Prymachenko among the 20th century’s great self-taught artists, she is an icon of Ukrainian national identity. Her fantastical paintings, praised during her lifetime by the likes of Pablo Picasso, are now found in some of the country’s most important museums. Her work has also been featured on postage stamps and her likeness is immortalized on commemorative coins.

But 25 years after her death, the Russian invasion is threatening Prymachenko’s legacy. Last week, Ukraine’s Foreign Ministry said that several of the artist’s paintings were among those destroyed at a museum in her native region of Ivankiv, about 50 miles northwest of the capital Kyiv, following an attack by Russian forces.
A video widely circulated online appears to show flames engulfing the one-story institution, which had previously described Prymachenko’s work as the “pride of the museum.” Her brightly-colored, almost childlike depictions of flora and fauna — as well as of farmers tending crops and plowing fields — were among the items initially thought to have been lost.

But reports have since emerged suggesting that an act of bravery may have saved more than a dozen of her works from the blaze. In fact, the Maria Prymachenko Family Foundation, which manages the artist’s catalog and is run by her great-granddaughter Anastasiia, believes that all the museum’s Prymachenko paintings were rescued from the building by a local resident.

“One heroic man managed to take the paintings away from the fire,” said lawyer Natalia Gnatiuk, one of the foundation’s partners, via phone from western Ukraine, where she has sought refuge. “There are 14 of them, but they are still not safe.” (Two ceramic works are believed to have been destroyed, however.)

CNN has been unable to independently corroborate this account. And while Gnatiuk said that her foundation had been in regular contact with the man, they have since lost touch as fighting continues in the suburbs north of Kyiv. She declined to name him or comment on the art’s possible whereabouts, fearing for the safety of both.

“After this war finishes, this is the first heroic story we will tell,” she added.

‘They hate our culture’

Prymachenko’s paintings are considered a prominent example of European “naïve art,” a term used to describe work by artists without formal training. Born into poverty in 1908, the painter rose from humble beginnings to earn the prestigious title of People’s Artist of Ukraine in 1970, when the country was under Soviet control.

Although best known inside her home country, Prymachenko’s work was shown in cities around Europe during her nearly six-decade career. In 1936, after visiting an exhibition of her paintings in Paris, Pablo Picasso is widely reported to have said: “I bow down before the artistic miracle of this brilliant Ukrainian.”

But while Prymachenko gained significant international attention, her work was firmly rooted in Ukrainian aesthetics. Having learned folk arts like embroidery and Easter egg-decoration before starting to paint canvases in the 1930s, she was heavily influenced by Ukraine’s crafting traditions, as well as its folklore, wildlife and traditional motifs.

Russian President Vladimir Putin’s recent assertions that the country is historically and culturally part of Russia — a pretext for last month’s unprovoked invasion — have led to fears that his military may seek to destroy examples of Ukraine’s unique artistic traditions. For this reason, Gnatiuk believes that the museum in Ivankiv was a direct target, not a victim of collateral damage.

According to Gnatiuk, around a third of the 3,000 paintings Prymachenko produced in her lifetime are found in Ukrainian museums, with the rest mostly held in private collections within the country. The National Museum of Ukrainian Folk Decorative Art in Kyiv counts more than 600 of her creations among its 80,000-item collection.

Speaking via Facebook, the Kyiv museum’s staff told CNN that they are “doing our best to save our collection.” The International Council of Museums has meanwhile called on the Ukrainian public to help protect cultural heritage, saying in a statement that it “invites members of civil society to reach out to their local museums to assist them, if possible, with the ways and means to protect their buildings and collections.”

With news of the Ivankiv museum attack spreading quickly around the world last week, overseas activists and arts organizations have been looking to publicize Prymachenko’s work as an act of solidarity. In particular, her 1982 painting “A Dove Has Spread Her Wings and Asks for Peace” — although not among those in the ill-fated museum’s collection — is gaining traction as a symbol of hope for the country.

In St. Louis, Missouri, artist Maria Carmen Knecht recreated the image as a street mural. A group called Justice Murals, meanwhile, projected a picture of the painting, among a selection of Prymachenko’s other works, onto the side of a building in Oakland, California.

At a rally in San Francisco on Sunday, six artists and more than 100 participants recreated the image as a 23-foot-wide ground mural outside the city’s Ferry Building. The message “Stop the war on Ukraine” was painted in blue just above.

In San Francisco, artists and activists produced a mural based on Prymachenko’s “A Dove Has Spread Her Wings and Asks for Peace.” Credit: David Solnit

“The Russian war in Ukraine is trying to destroy culture, so what we could do is to make it bigger and global,” said arts organizer David Solnit, who helped coordinate the latter initiative, in a phone interview. “They can burn the museum down but we’ll make it bigger and come back. It’s a desire to show some love and solidarity with Ukraine.”

Depicting a white dove against a vibrant floral background, the painting communicates both a universally recognized symbol and a message specific to Prymachenko’s home country, Solnit added.

“It’s a global sign of peace, not war, but very much in traditional Ukrainian style,” he said. “The beauty of Ukrainian traditional arts has caught on with a lot of folks here.”

SXSW 2022: Most Anticipated Films and TV Shows at This Year’s Festival

Fri Mar 11 , 2022
As the annual Austin, TX event readies to roll out its first in-person edition in two years, its packed slate offers plenty for attendees. Here are the best bets. Two years after its 2020 edition was moved to a virtual-only affair, SXSW is zipping back to (in-person) life with its […] 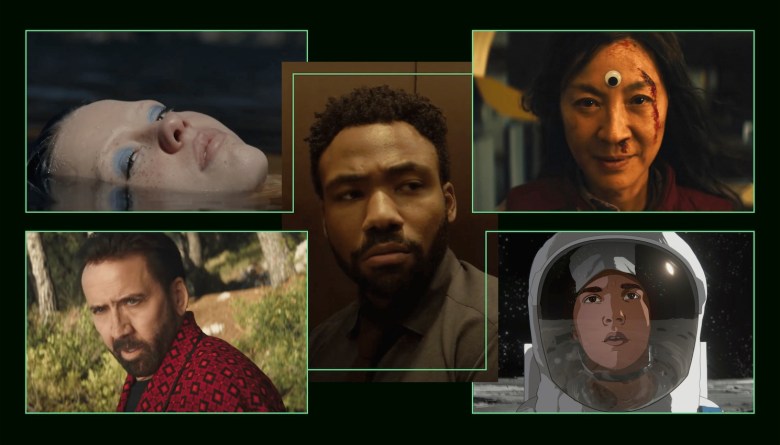