I’d always suspected as much, but the exhibition “Kimono Style: The John C. Weber Collection” at the Metropolitan Museum of Art has confirmed it for me: The kimono is one of the pre-eminent artistic mediums of the 20th century.

The show tracks the evolution of Japan’s most famous traditional robe — a T-shaped garment always cut from a single bolt of cloth — from the staid, silken formal wear of the Edo period (1615-1868) to the unbounded canvas for graphic display it became in the 1920s and after.

It’s also become an unlikely cultural flashpoint. In 2015, protesters accused Boston’s Museum of Fine Arts of using the garment as an Orientalist prop in a series meant to be about Impressionist painters using it the same way, and Kim Kardashian caused an uproar in 2019 for trying to appropriate the word as a brand name for her shapewear line. (Aside from the appropriation question, it was an ironic choice, since it was the kimono’s straight silhouette that inspired fashionable Western women to discard their corsets in the first place.)

The truth is that Japan and the West have been busily emulating and exoticizing each other at least since the 1868 Meiji Restoration. And that exchange, as the exhibition also amply documents, transformed fashion in both hemispheres. Because, as the curators, Monika Bincsik and Karen Van Godtsenhoven, are at pains to emphasize, the kimono is not just a symbol, a relic, or some kind of unchanging “national dress,” but a versatile, beautiful garment, worn by men and women, with a complicated history, and as much to say today as it said 100 years ago.

In the 18th-century, when it was starting to assume its modern form, the kimono was heavy, both literally and figuratively. Its distinctive patterns helped identify stage actors wearing stylized masks, and it was a place for the wealthy to show off elaborate brocade. In one such kimono from the Noh theater, rows of six-spoked “dharma wheels” in red, white and yellow alternate with pointy clouds over a repeating pattern of flowers set into interlocking golden rings. In another, less suffocating example, a delicate pattern of white chrysanthemums floats across beautiful large checks of white, orange, purple and green.

Comprising loans and promised gifts from a single private collection as well as items from the museum’s Japanese and costume collections, “Kimono Style” also includes such non-kimono treasures as a 17th-century pattern book, a striking jacket made of recycled fabric by the Ainu people of northern Japan and several reversible firefighters’ outfits with somber insignia on one side and riotous mythological scenes on the other. The Japan Wing’s permanent fixtures, too, make for elegant counterpoints as when an 18th-century Buddhist vestment is flanked by a pair of ancient wooden Buddhas.

But the show only really finds its focus when it gets to the late 19th century, the period when Japan opened to the West while undertaking a breakneck modernization. Japanese textiles appeared at the 1867 Paris Exposition Universelle and 1873 Vienna World’s Fair, and as Van Godtsenhoven notes in her acute catalog essay, by 1906 the French designer Paul Poiret was presenting “his first collection to be worn without a corset, based on the loose-fitting kimono.”

Back in Japan, mass production made the kimono less intricate, its patterns more experimental, and its cost much lower. Aniline dyes allowed for bolder colors, while the European Art Nouveau and Art Deco movements introduced new motifs in graphic new styles. In the racy early days of the Showa Period (1926-1989), a kimono could be printed with anything — delicate dewdrops and leaves of grass, giant arrows, an off-center Mount Fuji, even a giant spider creeping over one shoulder.

A spectacular series of pairings show kimono features — polka dots, standing collars, enormous arm holes — ricocheting from East to West for more than a century, while Western accents, like the Mickey Mouse that appears on a 1930s child’s kimono, flow back the other way. The hits run from Poiret’s stunning 1919 opera coat, made of a single swath of uncut purple silk velvet, to a 2018 kimono printed with oversize manga characters by Comme des Garçons founder Rei Kawakubo. But it’s not the Western clothes that profit from these juxtapositions. Next to a stark red kimono printed with lightning bolts, even an intricate 1939 harlequin coat by Elsa Schiaparelli can look fussy and overdone.

The one that really got me was a summer model from the 1920s or ’30s. Giant white swirls cascade across its dark green surface, subtly echoed by pale green swirls behind the white. (The green ones are hard to see in the exhibition’s dim lighting; I noticed them afterward, in the catalog photo.) It’s a motif, as the wall label notes, that goes back to prehistoric Japanese pottery, but here it’s presented with a Deco élan that remains fresh even after a century.

Add this to the already heady interplay between the object’s functional status as a garment and its painting-like display, to the tension between its infinitely repeatable pattern and the crisp boundaries of its back and sleeves, to the implicit contrast between its perfect flatness as it hangs from a rack and the curves of the body it’s meant to wrap around, and you get something as visually rich, as conceptually complex, as anything in the museum’s modern art wing.

A dispatch from inside Glenn Beck’s surprising art show

Tue Jun 14 , 2022
Glenn Beck is dressed comfortably — light-colored jeans and a T-shirt that reads “Love Thy Neighbor,” underneath a dress shirt left unbuttoned to add a hint of formality. This is Beck’s art show, which took place in Park City over the weekend, and the man of the hour dresses as […] 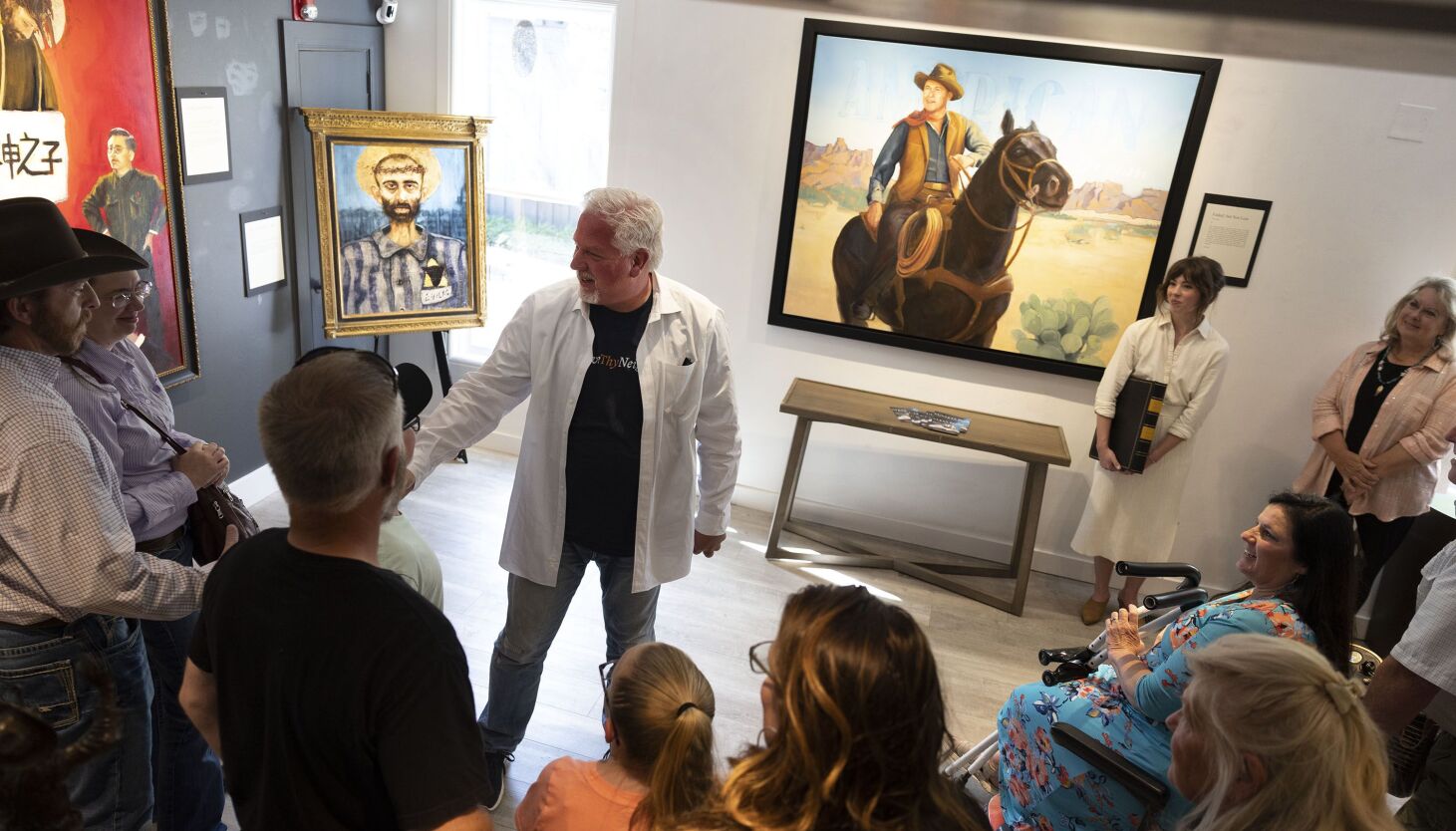