Welcome to the T List, a newsletter from the editors of T Magazine. Each week, we share things we’re eating, wearing, listening to or coveting now. Sign up here to find us in your inbox every Wednesday. And you can always reach us at [email protected].

Fragrance is all about storytelling. I layer scents: I use D.S. and Durga I Don’t Know What as my base and then top it with Frédéric Malle Rose & Cuir or Vetiver Extraordinaire, or lately I’ve been wearing the collaboration I did with Diptyque, Eau Rose. To finish, on the back of my neck I wear a tiny bit of the Night from Frederic Malle. For cleanser, I use Ultraluxe Red Grapefruit Wash and then Vintner’s Daughter Active Treatment Essence and serum. I’ve been using their products for five years or so — they’re so expensive but really work! The Matte 12 mattifier from Deciem is bomb. I really don’t like looking like I have on makeup when I’m on camera and, when I use this product, I feel like I don’t even need to. I love a long, hot shower, and I burn incense while I’m in there — there’s something so nice about the smoke and steam melding. I love Santa Maria Novella’s incense. I use Dr. Bronner’s Pure Castile Soap in either tea tree or peppermint and Le Labo’s Shower Oil; it moisturizes the skin after the Dr. Bronner’s really strips it. I use Pattern Beauty’s Intensive Conditioner a lot, and Shea Moisture’s Coconut & Hibiscus Frizz-Free Curl Mousse. I was using Renee’s Shea Souffle from Lush in my hair and on my whole body this past winter, because it was so dry, but in the summer I use Everyday Oil instead. I do like a Sea Breeze moment; that was my dad’s after-shave, and it finds its way into my bathroom cabinet every so often.

This interview has been edited and condensed.

“Every time I go to Mexico, I fall for it more,” says the New York-based landscape designer Grace Fuller Marroquín. For her latest project, she partnered with a workshop in the state of Michoacán to put her own spin on the region’s ornamental tradition of piñas, pineapple-themed pottery made with natural clay and formed to mimic the fruit’s spikes and leafy crown. The process for each of Fuller Marroquín’s unique planters, some of which come with a complementary (and complimentary) plant already set inside, involved selecting clay from the nearby mountains that was shaped and baked in an open-air oven, and then cooled for several days before it was glazed. Her designs have an almost alien quality that on second glance emulates that of flora: the pocked black face of a sunflower, say, or the pads of a cactus. “The master artisans within the country are unparalleled,” says Fuller Marroquín, who just planted her first project there and hopes to return soon. Starting this week, the 20-piece collection is on display and for sale exclusively at the Row’s Manhattan flagship. 17 East 71st St., (212) 755-2017.

A New Album From Pierre Kwenders

Born in Kinshasa, the Democratic Republic of Congo, Pierre Kwenders immigrated with his family to Montreal in 2001, and later joined his local choir. Around five years ago, he left his job as a tax collector and accountant to focus more on his music, for which he’s twice been nominated for Canada’s Polaris Prize. His third and latest album, “José Louis and the Paradox of Love” (2022), pays homage to his early years spent singing in church — and listening to the greats of Congolese rumba. Its title references the artist’s birth name, José Louis Modabi (he took his stage name from his grandfather Pierre), and he describes its songs as his most personal yet. They were recorded in studios in Montreal, Lisbon, Santiago, Seattle and New Orleans — Kwenders likes to “switch up the inspiration,” he says — and the result is an endlessly listenable album that combines pop, R&B and electronic music with melodic vocals delivered in a mixture of Lingala, French, English, Tshiluba and Kikongo. Among the standout tracks are the hypnotic opener, “L.E.S. (Liberté Égalité Sagacité),” and the dancier “Coupe” — though, really, either of these could be played at a dinner party or the club. Kwenders is also a co-founder of the artist collective Moonshine, which hosts parties, held around the world, every Saturday after the full moon. The group, he says, has a goal of “spreading love through highlighting music we can’t find anywhere else — people like to call it the global club sound, but for us most of it came from Africa.” So look out for the next lunar cycle, or catch Kwenders on tour next year. shop.arts-crafts.ca

The relationship between New York’s Metropolitan Museum of Art and Islamic works is long and rich, from the first pieces of jewelry it acquired in 1874 to the founding of its Department of Islamic Art in 1963 to the department’s massive expansion a decade ago into 15 galleries. This spring, the museum has observed the anniversary of that renovation by inviting a handful of global craftspeople who pursue ancient techniques and design principles to create fine jewelry, clothing, home goods and accessories for a capsule collection called the Heirloom Project, curated by Madeline Weinrib. “The Met has served as an endless source of inspiration for my work,” says the Brazilian jewelry designer Silvia Furmanovich, who looked to Iznik plates and tiles from the museum’s Ottoman-era archives to create two earring designs and a clutch, all inlaid with wood via the centuries-old practice of marquetry. Other participating makers include Munnu the Gem Palace, helmed by the Kasliwal family of Jaipur, which fashioned a pair of colorful enamel earrings featuring an Indian poppy motif, and the New Delhi-based contemporary jewelry designer Hanut Singh, who produced carved emerald and diamond pendants. Available at the mezzanine gallery of the Met Store, (212) 570-3767.

On a regular spring day at Rockefeller Center Plaza, you see the flags of the world’s 193 nations stirring gently in the breeze. But from May 5, the flagpoles will instead be flying everyday items of clothing donated to the artist Pia Camil for her “Saca Tus Trapos al Sol” (“Air Out Your Dirty Laundry”) installation, one component of “Intervención/Intersección,” an exhibit put on by the Mexico City-based gallery Masa and curated by Su Wu. At the remainder of the show — held inside a former post office — you’ll find a wide range of work by Mexican artists and non-Mexican ones whose work nonetheless engages with the country’s traditions. There are rarely seen erotic drawings by Adolfo Riestra, who was born in Tepic in 1944 and is better known for his totemic sculptures, and an original 1937 plaster relief carved by Isamu Noguchi, who traveled to Mexico City in 1935 and stayed for about eight months (it was inspired by his interactions with local talents, including Frida Kahlo, with whom he had a brief affair). These sit alongside contemporary pieces that repurpose waste materials, among them light switch covers resembling faces that Tomás Díaz Cedeño made from salvaged scrap metal, and sculptural car hoods riddled with bullet holes and repaired with gold rivulets in the Japanese Kintsugi style by Rubén Ortiz Torres. As Wu, who is interested in what it means to transform a space or material and to unsettle established narratives, sees it, “These artists are questioning the whole idea of monumentality and singular genius.” On view at Rockefeller Center Plaza and by appointment, May 5-June 25, masaatrockefellercenter.as.me/nyc. 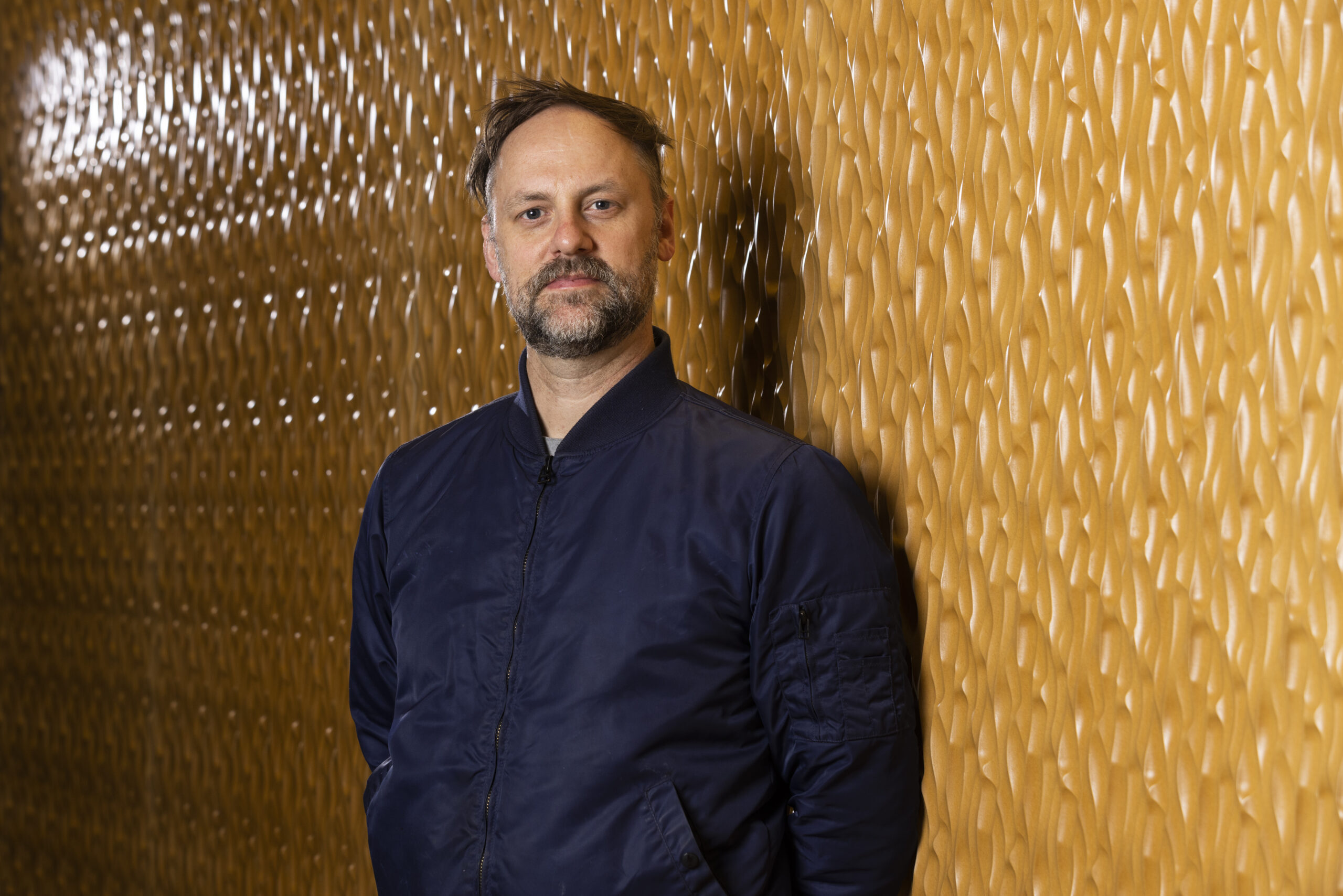