Every Wednesday morning, Artnet News brings you The Gray Market. The column decodes important stories from the previous week—and offers unparalleled insight into the inner workings of the art industry in the process.

This week, another detour in the democratization narrative…

If you are an artist or run an art business whose usual Instagram playbook seems to be failing at a disturbing rate in 2022, you’re not alone.

Just before the new year, Instagram CEO Adam Mosseri announced that the art industry’s most vital social-media app would move beyond photo sharing by “doubling down on its focus on video.” Just over three months later, the consensus among small business owners and some members of the art community is that the shift is wreaking havoc on their marketing plans, bottom lines, and in some cases their very survival.

Let’s back up. Although Instagram has been an ongoing presence in our lives since its launch in 2010, it’s misleading to think of the platform as a single static entity that has done the same thing in the same way for more than a decade.

Instagram and its parent company, Meta (fka Facebook), have steadily pushed new features into the app over that timespan. From a plethora of editing features for still photos, to time-limited Stories (which have themselves become increasingly customizable), to integrated shopping tools, developers ensured long ago that Instagram would be much more than a photo-sharing app to its roughly one billion active users worldwide.

Yet the menu of features isn’t the only aspect of Instagram that has been in constant flux since 2010. Instagram and Meta have also spent a dozen years steadily tinkering with Instagram’s algorithm, the behind-the-scenes coding that dictates what content will be pushed to the top of each user’s feed when they open the app.

As Instagram has become more robust, so too has its algorithm—or, really, its algorithms, plural, since different sets of instructions determine which posts are prioritized in the app’s various tabs, such as the main newsfeed, Stories, Live video, Explore section, or the latest addition, Reels.

Reels is the crux of Instagram’s latest existential crisis. Crafted as what Vox’s Rebecca Jennings called “a rather shameless TikTok copycat,” Reels allows users to create and edit short videos of between 15 seconds and one minute augmented by music, timed visual effects, and more. The hope among Meta and Insta execs was undoubtedly that Reels would cannibalize TikTok’s sprawling base of rabid fans at least as effectively as Instagram Stories cannibalized the user base of its model, Snapchat.

Those hopes for Reels failed to materialize on their own. Instead, the feature’s results have most closely mirrored that of IGTV, the app’s ill-fated attempt to gobble up another originator’s market share in long-form online video. Here’s Jennings:

Just as IGTV failed to become a competitor to YouTube, Reels hasn’t been able to replicate the magic of TikTok’s addictive and powerful algorithm. Instead, [Meta] has ensured the success of Reels by shoving its videos in your face every time you open the Instagram app. During [Meta]’s most recent earnings call in February, the company maintained that Reels was seeing “tremendous growth,” but it’s unclear whether people are watching because they’re seeking it out or because Instagram won’t let them avoid it.

At bottom, Instagram now gives short-form videos precedence over practically every other type of content users can generate. By extension, the change also means that account holders who leverage Reels will see their posts served up to users more aggressively than competitors who don’t.

If this shift sounds like nothing more than an inconvenience to you, then either your art business hasn’t been using Instagram to drive much engagement over the past few years, or your social-media content is managed by employees and/or coworkers who allow you to stay blissfully ignorant of how integral the platform has become to your connection to your audience.

Either way, data from elsewhere in the small-business universe has been alarming. A recent New York Times story (headlined “Food Business Lose Faith in Instagram After Algorithm Changes”) included one independent foodie entrepreneur estimating that her spice company’s average Instagram engagement had plummeted a full order of magnitude, from about 2,000 to 3,000 likes per post to only 200 to 300, among an audience of 100,000 users. (As an art-industry comp, New York’s 303 Gallery currently counts about 119,000 Instagram followers.) A social-media manager for a popular vegan jam maker cited a 38 percent decline in the number of users who even viewed the company’s Instagram posts in Q1 of 2022, as well as a 33 percent slide in visitors to its website.

Similar nosedives are already taking place in our own industry. When I asked one art-world marketing exec at a major company for their thoughts on the platform’s change-up, they started by flat-out stating, “I hate it.”

They went on to say that Instagram’s constant tinkering has transformed the platform into “a horrible Frankenstein app with declining functionality—and right now the algorithm is so disproportionately prioritizing videos that anyone who wants to use their Instagram channel as a vehicle for promotion is basically forced into making video, whether appropriate for their content or not.”

Much of the distress comes from the fact that it’s not easy to suddenly start churning out video content that the new algorithms will like. The Times story noted that “Instagram tells its users that successful Reels are high-quality; use text, filters and camera effects; are set to music and trending sounds; and are ‘entertaining and fun,’ featuring content that ‘delights people, grabs their attention, makes them laugh, or has a fun surprise or twist.’”

That’s a lot to ask for, especially from independent creators and small businesses on a limited budget.

“Executing video puts a big strain on time, energy, and resources,” said a social-media manager with experience in both the global art industry and a creator-economy startup. “While most artists can snap a portrait-mode photo on their iPhones and get something that looks professional, video is harder to accomplish in a low-lift way.” Independent artists may stand to lose the most from Instagram’s obsession with Reels. Spencer Tunick, whose often-censored photos capturing mass gatherings of nude models have made him all too familiar with Instagram’s ever-shifting landscape, called the latest algorithm revision “disappointing but not unexpected.” He lamented the future of the still image as video takes over social media platforms and even NFTs increasingly prioritize animation.

“There are some artists that want to slow down the world and feel that we need to have the time to be still,” Tunick said. “The still image does not give us all the answers. It gives our minds a chance to do its own imagining. This is important.”

He hoped that Instagram might implement a setting that would respond to users’ individual preferences for still photos or videos, similar to how the platform recently created an option allowing users to eschew algorithmic sequencing of content in favor of the reverse-chronological scroll from the app’s early years. But since the latter change only arrived after at least half a decade of lobbying, I wouldn’t hold my breath (and doubt Tunick will, either).

If I’m right, it’s a shame for basically everyone except those in two camps: the most successful, well-resourced brands in the art ecosystem; and the small minority of artists who are adept at producing video and/or have no qualms about hamming it up on camera during their day-to-day activities like aspiring influencers.

Even most users aren’t asking for a pivot to video. “Whenever creators poll their audience, people actually like photos and captions,” the art-world marketing exec said. This point is driven home by the headline of Jennings’s piece: “Nobody Wants More Crappy Videos on Instagram. Too Bad,” followed by the subhed: “Creators hate making videos that their audiences hate watching.” The piece features fashion influencers, weird-comedy accounts, and musicians spanning multiple genres and fame levels lamenting that maintaining an audience on Instagram now demands video, whether the content consists of the platonic ideal of Reels or just dumb little slideshows of stills that technically fulfill the mandate.

That doesn’t mean you can’t easily find surveys concluding that viewers crave more video content. I just don’t believe these surveys embody much more than the immortal adage, “Show me the incentives, and I’ll show you the outcome.” In other words, when some of the biggest, richest tech companies on the planet decide to execute a strategic 180 to try to knock out a competitor, it’s easy enough to commission surveys that conveniently find that said strategic 180 is actually what the masses are thirsty for. (It’s worth noting that Meta-owned Instagram, Google-owned YouTube, Snapchat, and TikTok owner Bytedance all have the same incentives here.)

The nascent shift feels all the more eyebrow-raising once you find out that Meta/Insta is literally paying account holders to hit monthly quotas for video views, as the creator of cult-favorite account Depths of Wikipedia attested to Jennings. For those in the know, this tactic should trigger flashbacks to 2015–16, when Facebook synced the announcement of its own infamous pivot to video with a campaign to bankroll media properties so they could actually produce the video content Facebook wanted.

Years later, Facebook admitted that the audience data used to justify the pivot to video was fatally flawed—a revelation that did little to compensate either the publishers that went bust or the scores of employees who were laid off once it became clear that readers wanted to stay readers, not morph into moving-image junkies. (In 2019, Facebook paid $40 million to settle a lawsuit brought by advertisers alleging the company massively overestimated the amount of time users spent viewing video ads; as part of the agreement, Facebook admitting no wrongdoing.)

Maybe this time will turn out differently. Regardless, Instagram’s all-in bet on Reels is forcing individual creators and art businesses of all sizes to adapt or die (or at least fade into obscurity on the platform). It’s another example of how success in the 21st-century art world depends more on the will of a tech behemoth’s growth strategy than anything resembling organic demand or unbridled creativity. If you don’t like it, well, there’s always fliers and wheat paste.

Who's Who in the New Julia Child Series?

Thu Apr 7 , 2022
It’s hard to believe that there was once a time when food television programs didn’t exist. Now you can barely turn on the TV without being inundated by a slew of cooking shows, baking competitions, and restaurant renovations. There’s just something comforting and cozy about watching chefs chop, roast, and […] 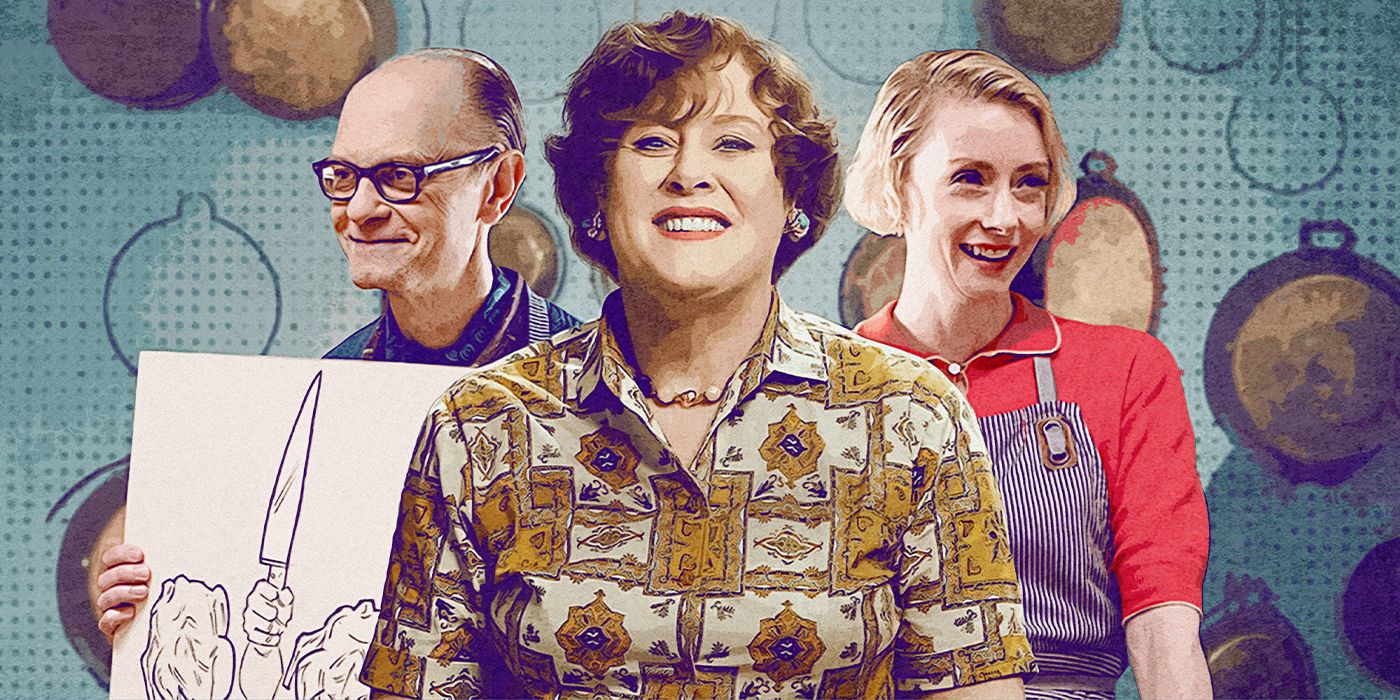