Graham Nash has joined his former bandmate Neil Young in taking his music off Spotify, in protest over the Covid misinformation disseminated by the streaming company’s star podcaster, Joe Rogan.

The Crosby, Stills, Nash & Young singer and guitarist, who also co-founded 1960s pop group the Hollies, said in a statement:

Having heard the Covid disinformation spread by Joe Rogan on Spotify, I completely agree with and support my friend Neil Young and I am requesting that my solo recordings be removed from the service. There is a difference between being open to varying viewpoints on a matter and knowingly spreading false information which some 270 medical professionals have derided as not only false but dangerous … The opinions publicised by Rogan are so dishonest and unsupported by solid facts that Spotify becomes an enabler in a way that costs people their lives.

Last week, Young requested his music be removed from Spotify, arguing that the platform had allowed Rogan – who was signed by Spotify in 2020 to make podcasts in a deal reportedly worth more than $100m – to advance “fake information about vaccines – potentially causing death to those who believe the disinformation being spread by them”. He later added to his criticism, accusing Spotify of “selling lies for money”.

A Spotify spokesperson said: “We regret Neil’s decision to remove his music from Spotify, but hope to welcome him back soon”.

In April 2021, Rogan said: “If you’re like 21 years old, and you say to me, should I get vaccinated? I’ll go, no”, but when challenged, said “I believe [vaccines] are safe and encourage many people to take them”. In January, he claimed the risk of teenagers getting myocarditis (heart muscle inflammation) from the vaccine outweighed the risk of getting Covid, a view challenged by a podcast guest and other researchers. He has wrongly argued vaccines use “gene therapy”, and promoted the use of anti-parasitic drug ivermectin, which has not been proven to be effective against Covid-19.

He also hosted virologist Robert Malone, who promoted conspiracy theories including that leaders had hypnotised the public into taking the vaccine. The Malone appearance was cited in an open letter from 270 US healthcare leaders criticising Rogan’s podcast.

Rogan apologised to Spotify in the wake of Young’s protest and said he bore the singer no ill will. He said he would “try harder to get people with differing opinions on” and “do my best to make sure I’ve researched these topics”.

I have decided to pull my music and podcast from Spotify. Neil Young opened a door that I must walk through. I believe in freedom of speech. However, I find Joe Rogan problematic for reasons other than his Covid interviews… For me it’s also his language around race. What I am talking about is respect – who gets it and who doesn’t. Paying musicians a fraction of a penny? And him $100m? This shows the type of company they are and the company that they keep. I’m tired.

In a conversation in January with writer and lecturer Jordan Peterson, discussing the ethnicity of Black US academic Michael Eric Dyson, Rogan said: “Unless you are talking to someone who is like 100% African from the darkest place where they are not wearing any clothes all day … the term Black is weird.”

Rogan and Spotify have not responded to Nash and India.Arie’s criticism.

Joni Mitchell and Bruce Springsteen guitarist Nils Lofgren also voiced support for Young in recent days and announced that their music will be removed, though both theirs, Nash’s and India.Arie’s music remains on Spotify for now.

Spotify has responded to the furore by appending resources with correct Covid-19 information to podcasts on the subject. Its stock market price, which had fallen slightly after Young’s decision, has rallied this week.

Art School Looked Like a Lot of Fun In the ’90s

Thu Feb 3 , 2022
To Matthew Atkatz, the college snapshots he kept in shoe boxes in his closet for years raised a koan-like question: “If they are sitting in a box,” Mr. Atkatz, 46, said, “do they have any meaning?” They do, it seems, when displayed alongside hundreds of forgotten snapshots collected from other […] 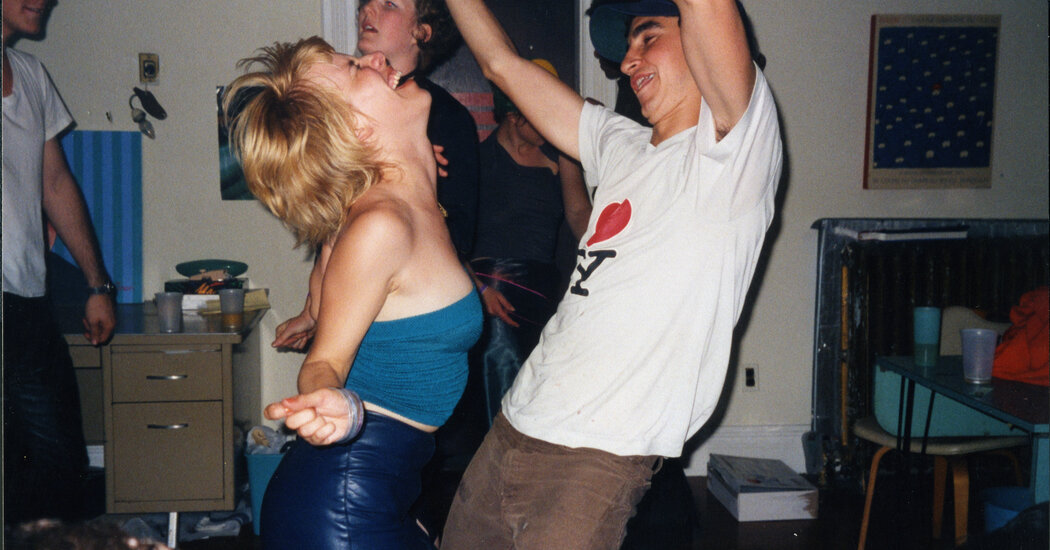