Gavin Millar, who has died aged 84 from a brain tumour, was a leading light of television arts journalism of the 1960s and 70s before going on to direct work by Alan Bennett, Dennis Potter and Victoria Wood.

His richest film was Dreamchild (1985), written by Potter, in which the elderly Alice Liddell (Coral Browne) reflects on her youthful relationship with Charles Dodgson, AKA Lewis Carroll, who used her as the inspiration for Alice’s Adventures in Wonderland. As well as shaping complex performances from Browne in her final screen appearance, and Ian Holm as the squirming, tormented Dodgson, Millar negotiated tonal shifts and moral ambiguities that might have foxed a less humane or sensitive film-maker.

“I don’t think there is any question but that [Dodgson] was in love with Alice,” he said at the time, “and in every possible sexual way, but without any physical contact … He turned all that passion and emotion into his books, and what she finally grasps is that, whatever the source of that love, it had been expressed in a beautiful manner.”

The sudden arrival in the adult Alice’s life of characters from the book, rendered by Jim Henson’s Creature Workshop as mangy, menacing puppets, complicated the mood still further. Millar insisted that the design should take the original John Tenniel illustrations as its starting point but that the result must look “as fierce as we felt an old lady’s nightmares would have made them”. Like the film itself, the puppets were “realistic and un-whimsical”. That went for Browne’s performance; Millar called Browne “hard as nails but full of feeling”.

Dreamchild was widely acclaimed. Andrew Sarris in the Village Voice called it “rousing and inspiring”, and chose it as one of the best films of the year.

Millar had previously directed an earlier Potter script, Cream in My Coffee, in 1980. That television drama, which starred Peggy Ashcroft and Lionel Jeffries as an unhappily married couple revisiting the scene of an earlier holiday, won the Prix Italia. He directed Bennett’s Intensive Care (1982) as well as one of the writer’s monologues in the second series of Talking Heads (1998), in which Julie Walters played the wife of a suspected murderer.

Among Millar’s most widely seen works were his collaborations with Victoria Wood: Pat and Margaret (1994), with Wood and Walters as estranged sisters who are reunited for a television show, and the double Bafta-winning wartime drama Housewife, 49 (2006).

Born in Clydebank, near Glasgow, Gavin was the son of Rita (nee Osborne) and Tom Millar, who both worked at the local Singer sewing machine factory. The family moved to the Midlands when Gavin was nine; he was educated in Birmingham at King Edward’s school. After completing his national service in the RAF, he studied English at Christ Church, Oxford (1958-61).

There he played Stefano opposite Melvyn Bragg in a production of The Tempest that he later described as “justly neglected”. While on a postgraduate film course at the Slade School of Fine Art, London, in 1962, he met Sylvia Lane after seeing her in a student production of A Midsummer Night’s Dream in Oxford, and they married in 1966.

Millar began working in television in 1963 on BBC series including That Was the Week That Was and the current affairs show Tonight. He directed music and arts programmes from the mid-1960s, added a section to the 1968 edition of the director Karel Reisz’s book The Technique of Film Editing, and was film critic of the Listener magazine from 1970 to 1984; he also presented or directed film programmes including The First Picture Show, Talking Pictures and the Arena Cinema strand. These documentaries brought him into contact with many of the towering auteurs of world cinema, including Woody Allen, Federico Fellini, Jean Renoir and François Truffaut.

His ubiquity in the arts landscape led to him becoming a target for parody. The second series of Monty Python’s Flying Circus, broadcast in 1970, featured a pompous critic, played by John Cleese and named “Gavin Millaaarrrrr” – the “R” is absurdly extended – who refers to “clever people like me who talk loudly in restaurants”. This was a source of lasting amusement to Millar and his family. His daughter Isabel said that the portrayal chimed with her father’s own “self-parody of the Oxford intellectual. As a working-class Scot, he had a certain ironic distance from that ‘posh English’ man that he became.” The sketch also appeared on the 1971 album Another Monty Python Record.

Along with Dreamchild, Millar made two other films for cinema: a warm, enchanting take on Roald Dahl’s Danny, the Champion of the World (1989), starring Jeremy Irons and his 11-year-old son, Samuel, and an adaptation of Iain Banks’s thriller Complicity (2000), which followed Millar’s acclaimed four-part BBC version of Banks’s The Crow Road (1996). Other notable TV work included Evelyn Waugh’s Scoop (1987) for London Weekend Television. Millar won an ACE award for Tidy Endings (1988), based on Harvey Fierstein’s play Safe Sex, with Fierstein as a man who befriends his late lover’s widow, played by Stockard Channing.

He also directed Denholm Elliott as John Le Carré’s spy hero George Smiley in A Murder of Quality (1991) and Kristin Scott Thomas in the three-part drama Belle Époque (1995), as well as episodes of The Ruth Rendell Mysteries (1996) and Foyle’s War (2004-07). His last film, Albert Schweitzer (2009), starred Jeroen Krabbé as the theologian and physician in later life.

Sylvia died in 2012, and he is survived by their five children, James, Tommy, Duncan, Kirstie and Isabel, and six grandchildren, Florence, Martha, Louis, Iris, Arwen and Gavin.

Sat Apr 30 , 2022
EXCLUSIVE: PopViewers, the movie and TV show recommendation app, announced a partnership with comedian and show host Steve Harvey. PopViewers is a Black-owned technology startup with a focus on the amplification of diverse voices. Harvey will partner with PopViewers Inc. to elevate its mission of not only helping users find […] 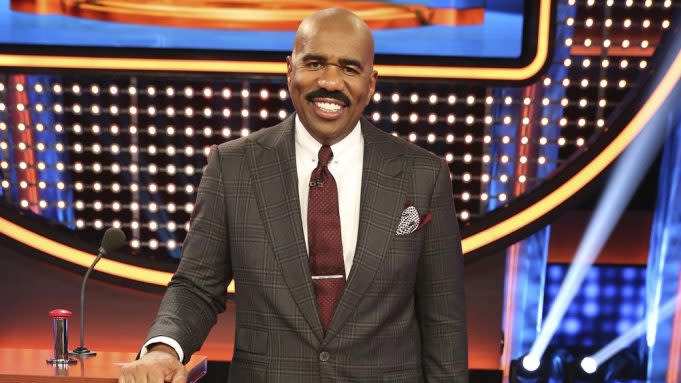