The Art Detective is a weekly column by Katya Kazakina for Artnet News Pro that lifts the curtain on what’s really going on in the art market.

Everyone is trying to cash in on Jean-Michel Basquiat.

Licensing deals. Luxury ad campaigns. Auctions. Films. Memoirs. Exhibitions. Basquiat has been part of the cultural narrative since he burst onto the scene in 1981, and his untimely death at 27 only added to the myth.

Today, the artist’s global brand has never been stronger. You can get a Basquiat Barbie at Walmart for $260 (up from $90 in May) or a Basquiat painting for $93 million at Christie’s. The Brooklyn Nets painted a Basquiat crown on their basketball court. Tiffany’s advertising campaign starred a Basquiat painting along with Jay-Z and Beyoncé. A New York exhibition organized by the Basquiat family, “King Pleasure,” has all the trappings to become a blockbuster when it opens in April.

The artist, who had an ambivalent relationship with fame, is now one of the best-selling painters of all time. His work generated $439.6 million at auction in 2021, the most ever for the artist—or any artist other than Pablo Picasso.

New consignments are starting to trickle in. This week, Christie’s announced a $30 million painting, Portrait of the Artist as a Young Derelict (1982), for its May sale in New York.

“Before, Basquiat was bought by contemporary art collectors and now his works are desired by collectors of masterpieces from any period and region,” said Jerome de Noirmont, a Paris-based art dealer who included Portrait of the Artist in an exhibition commemorating the 10-year anniversary of Basquiat’s death in 1998. The Brooklyn Nets playing at the Barclays Center, with Basquiat-themed jerseys and floor decor. (Photo by Elsa/Getty Images)

Some are uncomfortable with the sheer commercialization of the artist. Basquiat’s former assistant Stephen Torton expressed shock when Louis Vuitton, Tiffany’s new owner, suggested that the artist made Equals pi, the work used in its advertising campaign, with a pigment that paid tribute to “Tiffany Blue.”

“One should remain clear what’s what,” Torton said. “What’s what with Basquiat is that there are cartels trying to manipulate the market of his paintings; there are a lot of people trying to rewrite the narrative of his story; and there are even more people trying to cash in on his brand.” Beyoncé and Jay-Z with Jean-Michel Basquiat’s Equals pi (1982) for the Tiffany & Co. fall 2021 About Love campaign. Photo by Mason Poole.

Torton is now working on a multimedia project to correct the misinformation about Basquiat. “I am going to rubber stamp like an arrogant teacher,” he said. He plans to establish a chronology for the 100 paintings that he worked on between 1982 and ‘83 and detail the stories behind them, the materials used, and other pertinent details.

The artist’s popularity is a double-edged sword. Fakes are not uncommon, and any work that has surfaced since the Basquiat authentication board dissolved in 2012, after 30 years, has been regarded with some suspicion. (Dealers now rely on Enrico Navarra’s three-volume Basquiat catalogue, photographs of Basquiat with his work, and lifetime exhibition images and invoices.)

A museum show in Orlando, Florida came under fire last week for presenting a cache of little-known work by the artist that some scholars believe is fake. The fact that the estate has resisted signing with a gallery—which can help police fakes in the marketplace—also makes matters more complicated.

Indeed, Basquiat’s market is more complex and nuanced beneath the headlines. The painting Il Duce is coming up at auction in Shanghai next week with an estimate of $12.6 million to $18.9 million—roughly half the price it was offered at in 2017. A monumental 1982 painting The Guilt of Gold Teeth, consigned by Spanish artist and musician José María Cano and estimated at $40 million to $80 million, hammered for $37 million at Christie’s in November. (Cano still made out well, having purchased the painting for $387,500 in 1998.) The value of a Basquiat is determined first by the subject matter, medium, scale, and year, according to art adviser Todd Levin. Works from 1981 and ’82 are most prized, though the market is opening up to later phase. Most collectors seek paintings depicting a single figure or a head, with very well-worked surfaces, dynamic brushstrokes, and text. A crown is always a bonus.

Portrait of the Artist, which will be offered at Christie‘s in May, checks a number of these boxes. It’s never been at auction and remained in the same collection since 1995, when Basquiat’s highest auction price was $440,000. The owner resisted selling for decades, said de Noirmont. “He decided to sell it now because it’s a lot of money. You can love a painting but then after love you start thinking about the numbers. It’s normal.”

The 1982 triptych was first exhibited at the Fun Gallery in New York. An altarpiece of sorts, it teems with Basquiat signature iconography. “The painting is absolutely a chef d’oeuvre, one of the most important paintings by Basquiat,” de Noirmont said. Jean-Michel Basquiat, Portrait of the Artist as a Young Derelict (1982). Courtesy of Christie’s Images, Ltd.

It was also Basquiat’s first triptych, according to Torton. “I made it and said, ‘Look, it’s like a Russian icon.’ Because there was a larger piece in the middle and the two sides. And then we started making other triptychs.”

Next week, Christie’s will test the market’s appetite for a not-so-fresh Basquiat, Il Duce. Painted in 1982, it depicts a head at the center of a sparse, earthy-hued canvas.

Some may recall the last time Il Duce came up for auction. It was November 15, 2017, and the  most memorable thing about that day was another painting sold just one lot earlier: Salvator Mundi. The contrast between these two works was striking. One surged to $450 million, the world’s most expensive artwork of all time. The other failed to sell.

Estimated then at $25 million to $35 million, Il Duce had been guaranteed by Christie’s. When no one raised a paddle, the auction house had to buy it in while paying out the seller. Christie’s tried to sell the work privately. In the summer of 2019, it was on view at The School, Jack Shainman Gallery’s exhibition space in Kinderhook, New York, with an asking price of $30 million. Next week, Christie’s is rolling out Il Duce once again, this time in Shanghai, as far from its Rockefeller Center salesroom as it gets. The estimate has been cut almost in half. The painting belongs to Christie’s and the conservative estimate is a strategy, not a reflection of the Basquiat market, according to Celis.

“We talk to consignors every day about putting conservative estimates to achieve the greatest price and attract the widest audience,” she said. “In this case, we are in control of the estimates. We believe that the time to sell it is now.”

From Barbies to Blockbuster Shows, Jean-Michel Basquiat Is Big Business. But Can the Artist’s Market Ride the Hype Forever?

Mon Feb 28 , 2022
Two new art installations at Texas A&M San Antonio are turning heads. They’re the work of mosaic and concrete artist Oscar Alvarado. The first is in the ceremonial garden in front of the Central Academic Building. “The Presidential Seal mosaic that’s in the very center of campus, and it’s used […] 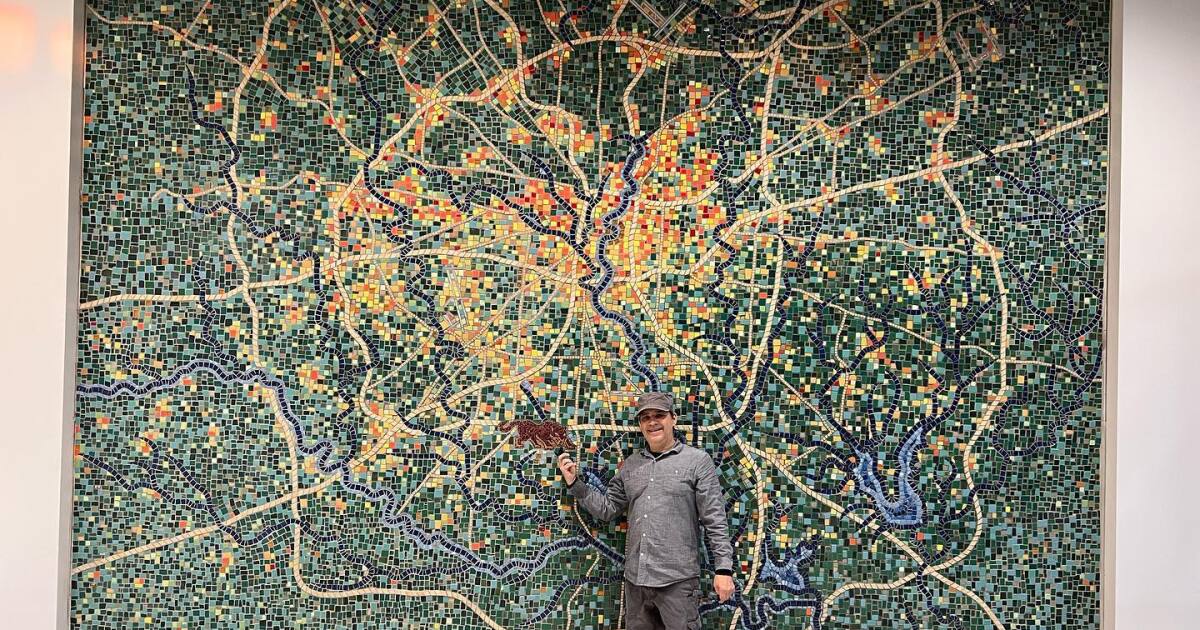