“Do you know who a hermit is?”, asks Nisha Agarwal of a group of six, wide-eyed children and is flooded with delightful replies. Seated on the floor and leaning on low blue tables at her house in Mattancherry, the group is Nisha’s storytelling and art class.

Listening to the exchange, 12-year-old Manya says she will build a tree house for the hermit, a homeless wanderer. When Nisha describes the physical appearance of Lord Shiva with his body smeared with ash, the class enters into a discussion on the properties of ash and why it is considered pure by Indians.

The storytelling is followed by teaching the children to illustrate the stories in different Indian art forms such as Warli, Madhubani, Gond, Kalighat and Saura.

“I developed an interest in Indian mythology, and Vedic stories about eight years ago,” says Nisha, who is a self-taught artist. She further honed her skills by learning under the late Kochi-based artist Ashanthan (Mahesh VK). A mother of two she felt a growing gap between Indian children and their knowledge of Indian culture and 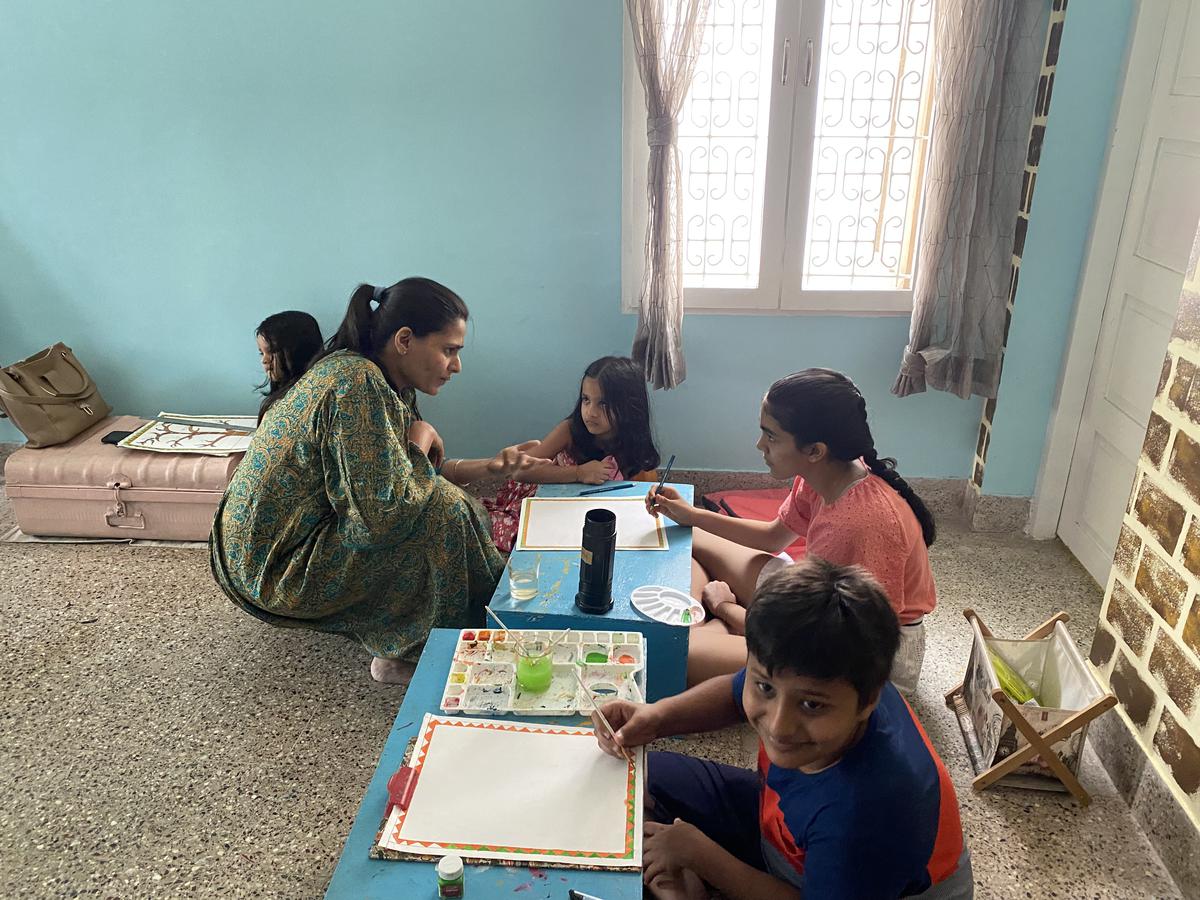 Nisha Agarwal at her art class in Mattancherry, Kochi

combined her two passions – Vedic stories and Indian art styles- in these classes, which have generated a good response.

Children in the age group of four to eight are told stories from the Panchatantra that have birds and animals as their main characters. “The animal world catches their attention,” says Nisha adding that she has them enact the stories too. The older children (ages 10 -15) are treated to stories from The Ramayana and The Mahabharata, besides other Indian tales. “The idea is that children remember these stories, so enacting is a good method. For the more complex stories with philosophy, I encourage discussion on spirituality, scriptures and religion.” Madhubani for The Ramayana

Nisha says certain art styles are better for certain stories, like The Ramayana is traditionally illustrated in the Madhubani style of Bihar while stories related to Lord Krishna are narrated in the Pichwai form, which has its origin in Rajasthan. “Kalighat paintings of Kolkata, known for their bright colours and bold outlines, have evolved to include modern topics,” she says explaining that a few art forms like the tribal art of western India, Warli and Saura, the tribal art of Odisha have some similarities.

“Saura has elongated figures and is more detailed. It holds the figure of the tribal deity Idital; Nature and festivals are the themes in Warli and Madhubani uses geometric pattens; dots and dashes are used to fill spaces in Gond art,” she explains.

Art Industry News: An International Three-Museum Matisse Extravaganza Will Kick Off in Philadelphia This Fall + Other Stories

Sun Apr 17 , 2022
Art Industry News is a daily digest of the most consequential developments coming out of the art world and art market. Here’s what you need to know on this Thursday, April 14. NEED TO READ Kerry James Marshall Painting Will Be Sold to Fund Genomics Research – On May 19, Sotheby’s […]