When Gary Oelze bought a small restaurant in South Arlington called the Birchmere in 1966, the only sound he cared about was the scrape of knives and forks against plates. It would take a while before a musical menu would supplant the food menu as the venue’s main offering. Now in its third location in Alexandria, the Birchmere has a sound that’s prized by both the artists who play there and the customers who listen.

In fact, there’s a whole chapter on the Birchmere’s sound engineers in “All Roads Lead to the Birchmere: America’s Legendary Music Hall,” the new book by Oelze and co-author Stephen Moore.

“It’s important to me because that’s what the people pay for,” said Oelze (pronounced OLE-zee).

Oelze came to the D.C. area from Kentucky after getting out of the Army. At first, the Birchmere restaurant he co-owned with Bill Hopper did a fairly good lunch and dinner trade. But when nearby residents started moving farther out — to places like Woodbridge and Dale City — the crowd thinned.

Oelze — who had played in bands as a teen — thought music might draw people in. And he noticed a certain type of music was especially popular then at bars around the city: bluegrass. Though not a huge bluegrass fan himself, Oelze respected the music. He didn’t respect the bars so much.

“The sound there was terrible,” he said. “Of course, those bars also kept the TV on in the bar and had a pool table.”

Inspired by the Cellar Door, the famed Georgetown club, Oelze enforced a no-talking-when-the-band’s-playing rule. And he eschewed equipment like the ubiquitous Shure Vocal Master PA system — speaker-filled columns that adorned many a gymnasium dance — and installed a Bose sound system.

He enticed bluegrass innovators the Seldom Scene from their weekly gig at Bethesda’s Red Fox Inn and started handling their live sound himself, experimenting with how to take intimate acoustic music and make it listenable to a larger audience.

“When I first started doing sound for the Scene, they only used one microphone,” Oelze said.

The five members would do what Oelze calls “that old bluegrass coordinated movement,” where each member would lean in to the single mic when it was time to sing or solo.

“I convinced them: Hey, [Dobro player] Mike Auldridge needs his own microphone,” Oelze said. “John Duffey needs his own mandolin mic, instead of flipping the vocal mic up and down.”

Oelze bought an Echoplex — a machine that uses magnetic tape to add delay to a sound — and ran Auldridge’s Dobro guitar through it.

“He thought he died and went to heaven with that echo,” Oelze said. “Nobody had used any echo in a sound system on him.”

Over time, the music at the Birchmere broadened to include not only bluegrass but country stars like Vince Gill and Mary Chapin Carpenter, along with rock and R&B acts.

“When the country bands came in, and the rock bands, they needed a real serious monitor system,” said co-author Moore. That’s the equipment that lets the musicians hear themselves onstage.

Said Moore: “Gary brought that in, then brought in Billy Wolf to put that on steroids.”

Wolf had worked with the Grateful Dead. Other sound engineers who have masterfully turned knobs at the Birchmere include Bud Gardner, Tim Kidwell and Justin Kidwell.

In 1996, the Birchmere moved to its current, 500-seat location in a former photo lab on Mount Vernon Avenue in Alexandria. Not long ago, Lyle Lovett was there with his band. The Ohio Players will be there at the end of the month and Southside Johnny & the Asbury Jukes in June.

It was 1974 when Oelze made the transition from food to music, not as part of any grand design, but simply as a way to lure in customers. Many clubs don’t last more than a few years. What’s the secret to the Birchmere’s longevity?

“Not trying to grow,” said Oelze, who at nearly 80 still works at the club, lining up the patrons who arrive early to get the best seats. “I stay at 500 seats. That is intimate and that is like you’re almost sitting onstage. I never said, ‘I’m going to go to 1,000 seats’ because I can sell 500 seats.

“And the Birchmere’s laid out right. It’s not a long room. It’s a wide room: no bad seating, no bad sounds.”

Some things do change. Oelze just ordered new sound equipment for the venue, made in the United States by a company called Meyer. What Oelze calls a state-of-the-art system will make its debut in June. Keep your ears peeled.

Fri May 6 , 2022
A Columbus developer is proposing a six-story apartment and restaurant development at East Long Street and Hamilton Avenue that would serve as an entrance to the King-Lincoln-Bronzeville neighborhood. The Kelley Companies is partnering with the Diehl family in the development, proposed for the site of the Diehl-Whittaker Funeral Service, 720 E. Long St. The proposal, […] 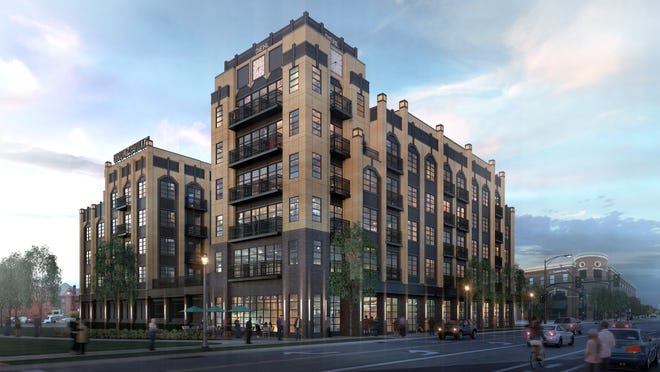