VENICE — It’s a bit lost now in the brain fog of time, but in March 2020 one of the first memes of the coronavirus pandemic arose from the waters of this Most Serene Republic. Some fraudster posted a picture of dolphins supposedly swimming in the Bacino di San Marco, and swans cruising down an unpolluted blue Grand Canal. The humans were gone, and Venice was a natural paradise! The city Henry James called his “repository of consolations” had been compressed to shareable size: an aquatic utopia, to be beheld on a touch-screen, as the virus scythed its way toward us.

The dolphins were a hoax. But the sense that humanity is the enemy of life and beauty: that part may be right, to judge from the heaving, confounding, chockablock preview days of the 2022 Venice Biennale. The world’s oldest and most prestigious international exhibition of contemporary art opens to the public on Saturday after a year’s delay, and the pandemic has hardly shrunk the exhibition’s size or its visitors’ self-importance. Yes, the crowds are a few ticks thinner in Venice in mid-April. (I’m not complaining.) Yes, the megayacht quotient has declined somewhat. (I’m certainly not complaining.) This is still Venice, though, and the Biennale remains art’s most combustible mixture of creative minds, spectacular wealth and a global culture stumbling its way toward the future.

For newcomers to the lagoon, a brief primer: The Venice Biennale is a show of two halves. It comprises a principal international exhibition — this year’s is the 59th edition; the first was in 1895 — that takes contemporary art’s temperature, along with more than 90 pavilions in which nations organize their own shows. Most often these pavilions present solo exhibitions; the United States pavilion this year has gone to the popular sculptor and ceramicist Simone Leigh. On top of that, Venice’s many museums time their biggest shows to open during the Biennale, while dealers, foundations, and chancers rent out canalside palazzi for pop-up exhibitions ranging from museum-quality to cash-and-carry.

The main show this year, organized by the Italian-born New Yorker Cecilia Alemani, is a tightly argued and frequently successful exhibition. An overwhelming majority of the participants are women, and surrealism, cyborgism, and animal and plant life are key themes. There are very fine new paintings in the main show by the New Yorkers Amy Sillman and Jacqueline Humphries; the final works of Kaari Upson, the tremendously ambitious Los Angeles artist who died last year; and fascinating historical inclusions of overlooked 20th century figures, many Italian, all women. I’ll be publishing a full review of Alemani’s exhibition next week, though I’ll say this much now: Her feminist, surrealist and ecological approach has produced a coherent and challenging show, whose optimistic vision of emancipation through imagination feels very rare nowadays.

But the national presentations are the worst collection I have seen in 20 years of attending the Biennale: a Nightmare on Garibaldi Street of half-warmed conceptualism, vapid jokey sculpture, leaden political point-scoring and at least one genderqueer cuddle puddle. Great artists, such as Maria Eichhorn, an incisive analyst of art’s institutions, and the Japanese theater and technology collective Dumb Type, turn in some of the least interesting work of their careers.

Breakout surprises, such as the tremendous climate opera “Sun & Sea (Marina)” in the last edition’s Lithuanian pavilion, are nowhere in evidence. Young artists faceplant one after the other. In the pavilions of both Serbia and Italy we encounter distant views of the sky meeting the sea, a screensaver-tier evocation of migration and loss. If you aren’t “critiquing” or “interrogating” some pre-existing material, you are stuck making vacuous fun houses like Denmark’s Uffe Isolotto, who places hyperrealist sculptures of dead centaurs amid pungent hay, or Austria’s Jakob Lena Knebl and Ashley Hans Scheirl, whose soft sculptures have a color scheme better suited to “The Price Is Right.” Venice is a city where the present has failed to live up to the past for 500 years. This year, the present is really taking a beating.

By my count, just two artists in the national pavilions have fully risen to the occasion. One is Małgorzata Mirga-Tas, a Roma artist who has filled the Polish pavilion with an enveloping 12-part tapestry whose imagery of Romani migration and everyday life coheres through countless scraps of stitched toile, paisley, lace and sackcloth. (Mirga-Tas is the first Roma artist to represent Poland here.) Her ebullient scenes of archers and guitarists, activists and pallbearers, have a stentorian grandeur equal to the frescos all around this city, applied at last to those pushed to the sidelines of European history.

The other is Stan Douglas, Vancouver’s towering intellect of photography and video art, who delves into the intersecting uprisings of 2011 (the Arab Spring, the London riots, Occupy Wall Street) in a contribution split between the Canadian pavilion and an old salt storage depot. Painstakingly staged photographic reconstructions of these 2011 rebellions turn Occupy and the Arab Spring into history, but it’s a two-screen video, titled “ISDN,” that reveals Douglas’s keen ability to reconstitute the present via fictional interventions into the past.

Here, we see two grime artists from London and two Cairo rappers of a related Egyptian style, engaged in a thrilling call-and-response across borders. But this is much more than a concert film: Douglas recorded the lyrics and 140-beats-per-minute bass line separately, and an algorithm cuts and sutures the British and Egyptian sounds into a perpetually new performance, an imagined community constituted through music and fiber-optic cables.

Among some grim national entries, Leigh’s U.S. pavilion stands out for its aspiration, its production values and its lofty comportment. Inside are new works in ceramic and bronze, which enmesh motifs from Baga masks, Egyptian funerary statuary, and the modernist stylizations of Giacometti and Ernst, who themselves redeployed African (and Oceanic) sculpture. (Leigh’s “Brick House,” the 16-foot bust previously on the High Line in New York, is also here in Venice, in Alemani’s central exhibition.) Outside, Leigh has invested the entire neo-Palladian pavilion with a temporary thatched roof, in echo of the colonial pavilions of the last century’s world’s fairs.

Reshaping or obscuring a pavilion’s architecture as a historical indictment has been a reliable approach here since Hans Haacke busted up the German pavilion in 1993. The art inside still has to work on its own, and Leigh remains most successful in ceramic works such as the large white “Jug,” an oversized reconstitution of a Southern face jug whose surface she embeds with enlarged cowrie shells, and “Cupboard,” whose stonewear shell atop a large raffia skirt builds on surrealism’s African appropriations and Caribbean afterlives.

Leigh’s bronzes are stickier, and her works get more trite as they get more figurative: “Last Garment,” a frank depiction of a Jamaican washerwoman staged in an actual pool of water, gains nothing from its weighty medium or imposing scale. The kind of intercession into history that Mirga-Tas’s Roma tapestries and Douglas’s transcontinental music execute with such vitality happens only intermittently here, and, as for a black-and-white film that pictures a Burning Man-style bonfire of one of Leigh’s totemic sculptures, the artist ought to trust in her original medium.

So welcome to the most lopsided and enervating Venice Biennale in recent memory, which came together amid a global pandemic and now opens under the sign of a European land war. Never has it been clearer that the national pavilions are a sideshow to the Biennale’s central exhibition, and that a country-by-country exposition of new art is decades past its sell-by date. (Courage to the international jury that had to see every one of them and will award the Biennale’s prizes on Saturday.)

Is it Covid? I wonder if the isolation of these years, and the subsumption of our locked-down lives by digital screens, has just wiped out any last remaining commitment to art as something more than a communications medium. Venice, though, is the city that has defined epidemics for the whole world: The word quarantine comes from the Venetian, and the “40 days” ships had to idle in the lagoon before their crews could disembark. Titian died of the plague here in 1576, while Thomas Mann’s “Death in Venice” turned a cholera outbreak into an emblem of social decay. Now we have FFP2 masks, which are mandatory inside the exhibitions; by prosecco hour it’s every respiratory system for itself. A good Venetian lesson is that plagues do end eventually. What art comes out of them is another question.

Marvel movies and TV series: Every MCU release ranked in order of worst to best

Mon Apr 25 , 2022
Regardless of whether you eagerly await a new Marvel film like Christmas or you see the studio as a box office freight train that needs to be stopped, you have to applaud studio president Kevin Feige. The Marvel Cinematic Universe has been in full swing for 14 years now and […] 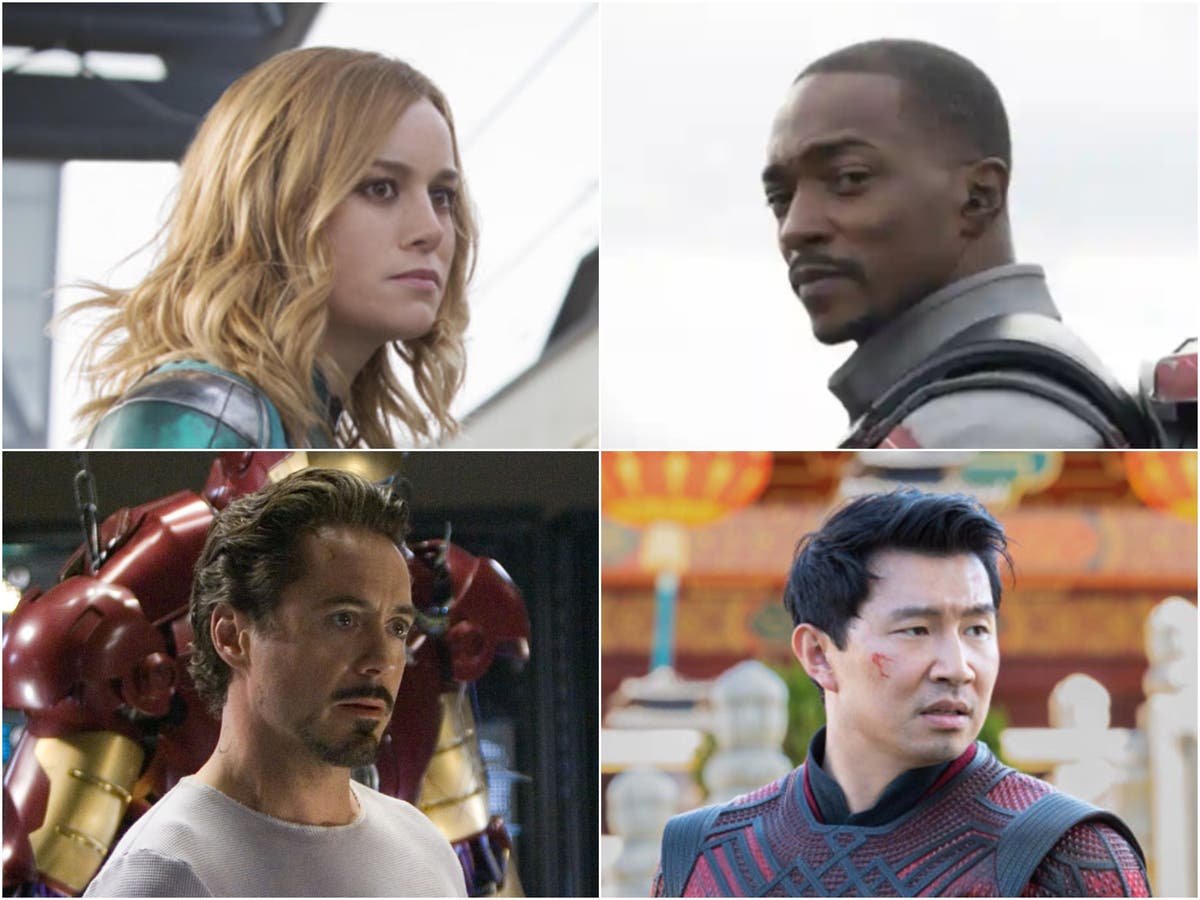