It’s 8.27am and I’m ushering a toddler and a school child into the car, a baby strapped to my chest just to keep things interesting. From the driver’s seat of our sultana-strewn Kia Carnival, I switch from my “Breakfast Chill” Spotify playlist to “School Drop Pump Up” and We Don’t Talk About Bruno from Disney’s Encanto soundtrack bursts forth.

Everything about the morning routine – from the oats I pre-soaked the night before, to the toothbrushes that are kept near the back door to jog our hygiene memories – has been curated to facilitate a loose order to the unavoidable chaos that is a house full of kids under six. The playlists are no less vital to our morning success than remembering to wash my eldest’s sports uniform in time.

For a generation of parents who have spent the past two years with more child contact hours than we would have ever expected, children’s music has become omnipresent.

“I think the biggest difference in the way parents and kids consume music these days, even compared to a decade ago, is how portable, customisable and accessible it is,” says Paul Field, a music industry giant.

Recorded with some of the country’s top musicians and composed by his brother John (who penned over 300 Wiggles hits – their other brother, Anthony, is none other than the Blue Wiggle himself), Field says he wanted to offer a diverse range of sounds and concentrate on production quality (“when you hear strings on a track, it’s an actual string quartet”) rather than focusing on a specific style or genre.

“We’re just starting with the music first [as opposed to creating a band], because this way we can use a carousel of different musicians, singers and styles. I feel that brings quite a bit of variety to the sound.”

As far as industry pedigree goes, Field has good reason to bet on himself. During his 24-year management, the Wiggles topped Business Review Weekly’s list of highest-earning Australian entertainers for four years running, sold millions of albums and appeared on TV screens in over 100 countries.

Even discounting the stratospheric success of the Wiggles on the world stage, Australian children’s entertainment exports are overrepresented abroad.

“At the moment, we actually have more listeners in the US than here,” says the musician and comedian Matt Okine, one half of the kid’s entertainment duo Diver City; his partner is the musician and producer Kristy Lee Peters. He credits the all-important peer-recommendation algorithms on streaming platforms with this international success.

Music has, historically, been divided into age-dictated blocks; there’s children’s music and then there’s grown-up music, each walled off from the other. It is this tension, says Peters, that forms the origin story of Diver City.

“When you have kids, you listen to music over and over, and over and over and over and over again,” she laughs. “Coincidentally, Matt and I both had kids five days apart. We went away on a family holiday and started chatting about it, and the idea kind of came out of finding something that could bridge the gap between children’s music and music that adults would like or would at least be bearable.”

For every “bearable” piece of kid’s music, there is a famously unbearable alternative. Korean entertainment company PinkFong’s repetitive techno juggernaut Baby Shark, which became the most-viewed YouTube video of all time, is forcefully embedded into the amygdalae of parents the globe over.

And while annoying parents with the musical equivalent of a mosquito can be lucrative, there is fertile ground (and perhaps more longevity) in the possibility of making something they’ll enjoy alongside their kids.

“We’ve collaborated with a lot of artists grownups will recognise,” Okine, a Triple J alumni, says. “Which brings an added layer for parents.”

These artists include Ball Park Music’s Sam Cromack, Art Vs Science and Peking Duk, to name a few. The subject matter they explore ranges from the sublime inclusivity anthem Love Is Love (Rainbow Family) to the ridiculous Sad Spaghetti, written from the viewpoint of a lonely leftover strand of pasta. It lifts directly from the millennial parent’s playbook.

And indeed, the kid’s music scene in Australia seems suddenly full to the brim with artists who made it big creating music for grownups, became parents and then pivoted. Old-school 90s dance/rock favourites Regurgitator have created the kid’s offering Pogogo Show, reworking the lyrics of one of their NSFW classics to a kid-friendly I Sucked A Lollipop To Get Where I Am, alongside other tracks such as Mr Butt. The Little Stevies – hardly a household name in their former life as a folk outfit – have found far more success since rebranding to kid’s favourite the Teeny Tiny Stevies.

As for the Wiggles, they’re playing the game in reverse; the skivvy-clad icons have harnessed a second wave of success through over-18s gigs and a Tame Impala cover that saw them crowned the unlikely winners of this year’s Triple J Hottest 100.

If there is a winning formula for making successful music for kids in this country, it’s one Paul Field has helped shape. “One major factor is that you’ve got to look at things through the eyes of a child,” he says.

“It’s not always simple, because our audience ranges from pre-verbal to kindergarten and beyond, so you want to make something that appeals to all levels of cognition.”

But while looking through the eyes of children, being mindful of not offending the ears of adults has another benefit, he adds: the increased likelihood of more airtime. “In the early childhood world … It’s personal recommendations that really carry weight.”

There are few people in Australia more trusted to make these exact kinds of recommendations than Zoë Foster Blake, skincare entrepreneur, author and mother. A prolific curator of cool stuff – her blog Zotheysay once crashed under the weight of traffic from her post about which baby products she used and loved – one of the tastemaker’s pastimes is playlist creation on Spotify.

“I do get excellent feedback from parents,” she says of her playlist hobby. “I think we’re all just sniffin’ around for new ideas as parents; we’ll try anything.”

In the Foster Blake household, music is a crucial pillar of family life and something her playlists – with names such as “Hey Kids, Calm Down”, “Kids In The Car”, and “Mornings With Kids” reflect.

“Good music is good music,” she says. “Both The Wiggles and Queen have songs the whole family can enjoy; it brings me great joy finding and collating them.”

Field’s Peachy Keen incorporates a lot of the traditional early childhood themes you might expect. There’s the gross motor encouragement in Jump Like A Froggy Does and the numeric repetition in Ten Koalas, while Tummy Time, a track tragically close to Field’s heart, promotes safe sleeping practices after the father of five lost his daughter Bernadette to SIDS in 1988.

He doesn’t shy away from the simplicity of some of these tracks, arguing “it’s actually wonderful because, as we all know, in the early childhood world, everything is new. So, what may appear mundane or banal to two grownups is actually magic for kids.”

School and daycare drop-off completed, with full autonomy over the car stereo once again, I have to concede that Field is right. One of the bops on Animal Songs, entitled Ten Puppies, So Cute! is playing: a jazzy Winehouse-esque vocal atop a sexy Spanish guitar riff. I’m going to have it in my head for the rest of the day, and I’m OK with that.

Mon Jun 13 , 2022
Written by Stephy Chung, CNNHong Kong Asia’s largest art fair is back in business. That’s the message organizers of Art Basel want to get out. But after enduring two years of pandemic-related difficulties, this year’s Hong Kong edition — its second hybrid version — was a very different event to […] 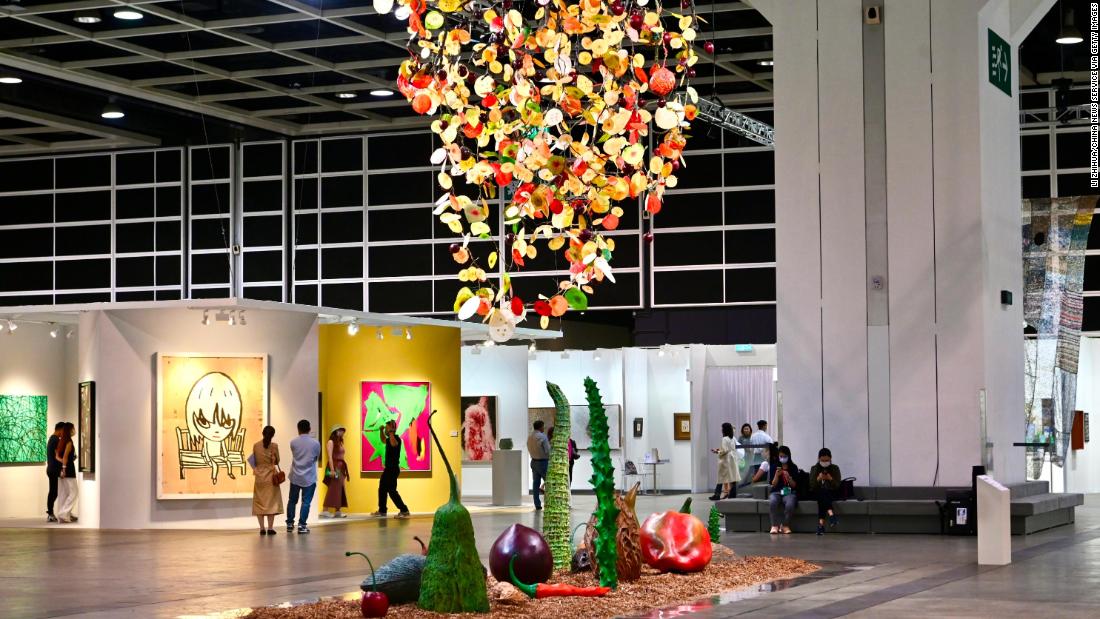