Art Industry News is a daily digest of the most consequential developments coming out of the art world and art market. Here’s what you need to know on this Monday, June 13.

Smithsonian to Return Indigenous Artifacts (Sort of) – A collection of Mi’kmaw artifacts are heading back to modern-day Nova Scotia, Canada, after being kept at the Smithsonian’s National Museum of the American Indian for decades. The approximately 500 items, which include regalia, quillwork, and woven baskets, were taken by American anthropologists in the early 1900s. They will return home by 2025 in what the Smithsonian describes as a “shared stewardship agreement.” (CBC)

Botched Picasso Sale Sparks Lawsuit – Incomplete payment and a complex chain of holding companies are at issue in a lawsuit filed in a New Jersey court by collector Stella Isabella Djohan against Neville Keating Pictures Limited. Djohan alleges the company failed to pay the full $7.75 million price for Picasso’s Femme Assise (1958) and proceeded to transfer custody of the painting to various companies without her consent. She is asking the court to declare her the sole and true legal owner of the work. (The Art Newspaper)

Glenn Beck Is a Painter Now – We regret to inform you that the latest right-wing figure to reinvent himself as an artist is Glenn Beck (though he rejects the label “artist”). The conspiracy theorist and political commentator picked up painting during the pandemic and is now displaying his work at Park City Fine Arts in Utah. Proceeds from the sales will fund Beck’s charitable work. Subjects include Teddy Roosevelt, a 1936 boxing match between Joe Louis and Max Schmeling, and, um, depictions of Jesus Christ as a prisoner in Mao’s China and a concentration camp. “I don’t want to make [art] about politics,” Beck said. “This history counts to all of us.” (Deseret News)

Documenta Increases Security Ahead of Opening – The Kassel quinquennial will tighten its security measures in light of the threat of vandalism. The show’s organizers filed a report with local authorities after unknown individuals broke into and graffitied the exhibition space of the Palestinian artist collective The Question of Funding, which has been at the center of the show’s anti-Semitism debate. Documenta opens to public on June 18. (Monopol)

Michigan Museum to Build Wing Dedicated to Female Artists – The Muskegon Museum of Art plans to build a permanent exhibition space dedicated to female-identifying artists thanks to a $12 million donation from San Antonio-based collectors Steven Alan Bennett and Elaine Melotti Schmidt. The gift—which comprises 150 paintings by 115 artists, plus $1.5 million in cash—comes as the museum is in the midst of an expansion, expected to be complete by 2024. (ARTnews)

The Morgan Library Gets a Makeover – The Morgan Library and Museum in New York has completed the $13 million restoration of its landmark 1906 building designed by Charles Follen McKim as well as the construction of an adjacent new garden. The 5,000-square-foot green space houses sculptures from the Morgan’s collection. (New York Times)

Met Exhibition Showcases Work by Museum Employees – Perhaps unsurprisingly, staff at the Metropolitan Museum of Art have considerable artistic talent. They are showing it off in the exhibition “Art Work: Artists Working at The Met,” which features the artistic contributions of more than 450 staff members including librarians, technicians, security guards, and volunteers. The show runs until June 19. (Time Out New York)

Art Industry News: We Regret to Inform You That Glenn Beck Is an Artist Now, and His Paintings Are Just as Bizarre as You Suspected + Other Stories

Wed Jun 15 , 2022
When the horror YouTube account Dead Meat exploded in 2017 and amassed millions of views in mere months, it wasn’t an overnight sensation. As far back as their film school days at the University of Michigan over a decade ago, co-creators and spouses, James A. Janisse and Chelsea Rebecca have […] 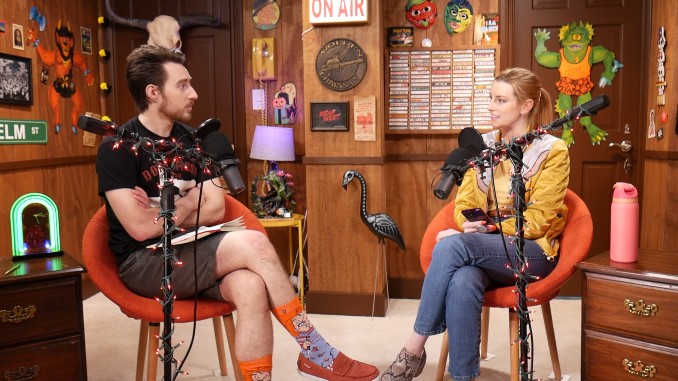