Asia’s largest art fair is back in business. That’s the message organizers of Art Basel want to get out. But after enduring two years of pandemic-related difficulties, this year’s Hong Kong edition — its second hybrid version — was a very different event to the one that drew bumper crowds back in 2019.

For one it was smaller with the number of galleries on display around half that of pre-2020 levels. It was also far more subdued.

The fair has long been an integral gathering on the arts calendar, especially among the region’s monied elite. But faced with tough border restrictions — Hong Kong is subject to some of the world’s strictest Covid-19 measures, including a mandatory one-week hotel quarantine — many international collectors and art dealers chose to stay away. More than half of the participating galleries opted for satellite booths — or elected to have a local representative on ground instead of flying in their own staff.

And despite the use of livestreams, virtual tours and online viewing rooms to help reach wider audiences, many galleries curated their selections with the sizable local market in mind.

“That’s why you feel the size, volume and price point (of works) is more moderate than before,” said Danqing Li, senior international partner at the Levy Gorvy Dayan Rohatyn (LGDR) gallery, which has locations in New York, London, Paris and Hong Kong.

The LGDR selection included two Banksys, a Keith Haring and painting of Chinese leader Mao Zedong by Andy Warhol, each priced in the multi-million-dollar range. Pre-pandemic, Levy Gorvy was also bringing “super high value” works including a $35 million masterpiece by Willem de Kooning — which famously sold during the first hour of the fair in 2018.

For the collectors in attendance, the scaled-back version had its advantages. Navigating the fair was made easier, with 130 galleries spread across one floor of the city’s exhibition center, rather that the around 240 across two floors as in years past. Another notable feature was the focus on Hong Kong galleries and artists, both of which were able to claim more of the spotlight.

Larger pieces by Hong Kong artists such as “Fidgety” (2018), a nervy sound installation created by musician GayBird and “Deconstructing” (2004-2019), a knitted sculptural piece made of shredded magazine papers by Movana Chen, were exhibited by Hanart TZ and Flowers Gallery respectively.

Elsewhere, Hong Kong-based de Sarthe Gallery, which also has offices in Beijing and the US, reported that just over two dozen works by local conceptual artist Mak2 were sold within the first day, with her striking paintings going for $18,000 to $30,000. Gallery founder Pascal de Sarthe said he didn’t expect the booth — which included works by Chinese artists Zhong Wei and Lin Jingjing — to “pretty much sell out” within the first few hours of the fair, with buyers based abroad viewing the artworks via WeChat and WhatsApp video calls.

Another trend this year was the large number of galleries opting to exhibit solo presentations, a format according to Art Basel Asia Director Adeline Ooi, that offers collectors “more to chew on.”

“When you see one work by each artist it’s like one word. And sometimes it doesn’t make sense,” she explained. But when you see a whole body of work put together, it’s a paragraph… in that way, it feels more focused.”

In the Discoveries section, Seoul-based Jason Haam presented a number of moving paintings by Senegalese artist Cheikh Ndiaye. Xavier Robles de Medina’s eye-catching replications of archival photographs were also shown in this section — and while the artist wasn’t able to fly in, an iPad screen positioned next to a makeshift sign reading “come talk to the artist and gallerist” sat at the Catinca Tabacaru booth’s table with both Robles de Medina and founder Tabacaru dialed in from Bucharest, Romania.

“As a young gallery, you’re working your way up through a ladder and for the art fairs, Art Basel is the apex,” said Tabacaru, who was excited about the inclusion of her namesake gallery at this year’s event. “Playing at this level is worth it,” she said, adding that whether or not Robles de Medina’s works would all sell, “it comes down to being part of the conversation that matters.”

Hong Kong’s stringent Covid travel restrictions and terse political environment has called the future of the event into question, especially as other Asian cultural hubs like Singapore get stronger. Though the viability of the global art fair concept has also been debated upon in recent years.

“It’s a time of change,” said economist Clare McAndrew, who prepares an authoritative report on the global art market each year. “The Art Market 2022” report revealed that while sales via fairs rebounded to 29% (including 2% via online viewing rooms) in 2021, the figure was nowhere near 2019 levels, where 43% of total sales made by dealers occurred at art fairs, surpassing even those taking place at gallery premises.

“Businesses are really auditing the number of fairs they do, the returns they get from them, the costs and from the point of view even of sustainability and not wanting to travel all the time.”

“The Shape of Light” (2022) by Ellen Pao, a moving image work co-commissioned by Art Basel and M+, presented on the museum’s facade. Credit: Courtesy Art Basel

But Hong Kong’s strong base of wealth, coupled with factors like its favorable tax and regulatory environment, she said, still makes the city an attractive place to conduct art business. Indeed, just two floors above this year’s Art Basel, Christie’s was holding its live spring auctions. And the number of reputable art institutions feeding into the local cultural infrastructure, including M+ museum, have also grown in the city.

“We’ve had 10 years in Hong Kong… and if you think about our journey together it’s been bright,” said Ooi of the fair’s commitment to the city. “Sure there have been a few bumps, but we’re not fair-weather friends.”

Mon Jun 13 , 2022
In a posting on Nintendo’s Japanese recruitment site, Super Mario Odyssey VFX lead artist Junki Ikeuchi delved into the game’s visual effects. The team sought to create cohesion between the effects and the different art styles. Ikeuchi spoke about how “ideas were taken from both themes and blended together.” Creating […] 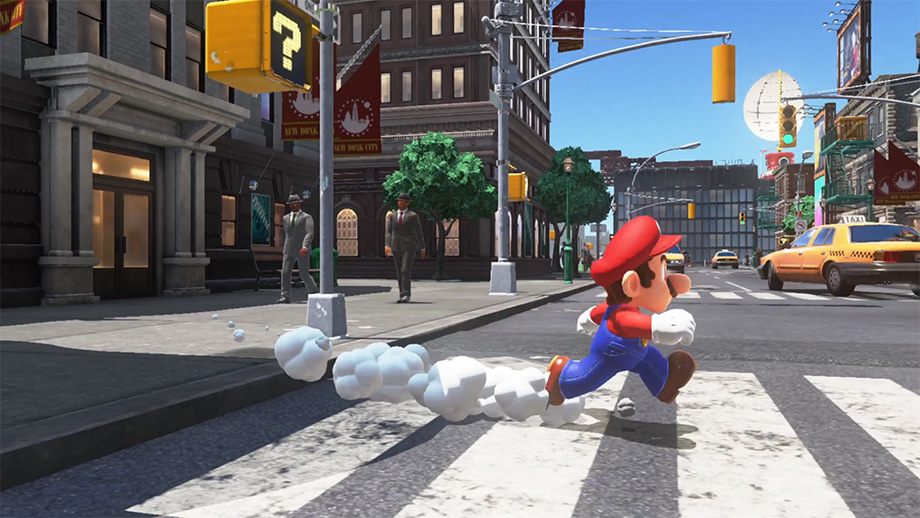