Felix Xu started his NFT art collection by purchasing a Chromie Squiggle, generated by an algorithm. Today, Xu, a 29-year-old Chinese tech executive, has more than 3,000 blockchain-based collectibles. But there is a hole burning in his crypto wallet that he would like to fill with real paintings. His budget stretches toward $500,000 and he is already on the wait-list for in-demand artists who use paint and moving brushes like Zhang Zipiao.

So in December, Xu, a founder and chief executive of the start-ups Arpa and Bella Protocol, ventured through the gallery booths of Art Basel Miami Beach, where dealers from David Zwirner and Pace Gallery tried bending his ear toward the contemporary art market. He was looking for an education; they were looking for a sale.

“I was really amazed with all the sculptures and paintings,” Xu said in an interview, crediting the fair with expanding his interest from blue-chip modernists like Picasso toward living artists like Nigel Cooke and Jessie Makinson.

Xu is among the increasing number of NFT collectors looking to invest their cryptocurrency in something tangible: a traditional art collection, starting with the painting he bought in January by Renqian Yang, a Chinese artist living in New York.

Critics have scoffed that a marriage between NFTs and the art world is impossible. But catering to the tastes of the crypto nouveau riche has become the frantic obsession of the commercial art world, which is reshaping itself around these new collectors nearly a year after artists like Beeple and Pak sold NFTs, or nonfungible tokens, for tens of millions of dollars, inspiring the typically technophobic art industry to head into the metaverse.

After all, among the NFT collectors roaming Miami Art Week was an anonymous crypto collector, known as Pete D., who bought a 1950 tapestry by Le Corbusier from Boccara Gallery before posting about “the weird and wonderful world of top-tier physical art collecting,” on his blog. And Rahilla Zafar, based in Austin, made her first purchase from the fairs, a painting by Matthew F. Fisher offered by OCHI Gallery.

“The gallerist said he was an amazing artist whose pieces are going up in value,” said Zafar, a documentarian and an adviser for blockchain start-ups. To her pricey NFT collectibles BoredApes and CryptoPunks — where proof of ownership is stored on the Ethereum blockchain — she has since added two dozen works for her walls.

Even as they court collectors from the metaverse, art galleries are going further, embracing the technology that threatens their business model. Many have invested in digital platforms. Industry experts say it is an opportunity for dealers to limit incentives for their artists to cut them out as the middlemen and independently sell their work.

“The art market is always looking for a new territory to expand into and the NFT world is like the perfect gateway drug,” said Natasha Degen, chairwoman of art market studies at the Fashion Institute of Technology. “Anyone involved in a market like NFTs that is so volatile and speculative would have an easy time transitioning to the art world where those same dynamics occur.”

Sotheby’s started selling NFTs only last year, but the digital assets generated $100 million in sales, the company said, with 78 percent of all NFT bidders being new clients — and more than half of those bidders under 40.

“In the last three or four months, we have seen a greater interest in physical art from NFT collectors,” said Charles Stewart, the auction house’s chief executive, explaining that new collectors craved the context for their digital creations that art history could offer.

(Its competitor, Christie’s, says it brought in $150 million in NFT sales. Both auction houses are now doubling down on the crypto business. Sotheby’s, for example, has joined a $20 million investment in the NFT marketplace developer Mojito, which helped the auction house build its own virtual gallery last year.)

An early convert from the NFT community, Justin Sun, the tech entrepreneur and founder of the cryptocurrency platform TRON, bought a $20 million Picasso at a Christie’s auction last year. In November, he continued his buying spree at Sotheby’s with a $78.4 million purchase of a 1947 Giacometti sculpture, “Le Nez.”

It was Sun’s art adviser, Sydney Xiong, who handled the transaction by phone. Xiong has helped the crypto billionaire assemble a collection of traditional and NFT artworks for his APENFT Foundation, a platform she has said will bridge the gap between the art world and metaverse.

“Before the auction, he didn’t know anything about Giacometti,” explained Xiong, who said the pair discussed the artist for three hours before placing a bid. “I tried to educate him and let him know how important the lot was and why we should have it.”

In November, APENFT Foundation started a $100 million fund to cultivate the talents of digital artists. More than 30 people now work for the foundation, which has plans to exhibit its physical and digital collection in Shanghai. Xiong said that the foundation is now considering minting Giacometti and Picasso NFTs on the TRON blockchain, a cryptocurrency platform also created by Sun.

(In December, Sun said that he would retire from TRON to promote blockchain and crypto use in Latin America.)

Many artists have moved into the metaverse with projects that straddle digital and physical elements. Oftentimes, the admitted goal is to convert the crypto riche into art connoisseurs. Forsaking his furniture design and museum exhibitions, the artist Tom Sachs has a pet art project called “Rocket Factory” where users can purchase three separate stages of a digital NFT rocket ship; once the ship parts are combined, the artist launches a physical replica into the sky. After it’s recovered, the replica is shipped to its owner in a custom display box and the online version is updated with metadata from the launch.

Sachs described the project as turning his studio into a “trans-dimensional manufacturing plant” where he is fabricating 1,000 rockets. He has sold hundreds of rockets to art collectors and is working at breakneck pace trying to get everything completed.

“We have our development team in Portugal, which has contractors in South Africa and Germany,” he explained. “We just hired someone named CoolCat who — I don’t know her real name — has a key to the studio.”

He has also tried to convince dealers and institutions to embrace the new technology. In November, the artist helped the Los Angeles County Museum of Art initiate its acquisition of an NFT from “Rocket Factory,” guiding the museum through the process.

What Is the Metaverse, and Why Does It Matter?

The origins. The word “metaverse” describes a fully realized digital world that exists beyond the one in which we live. It was coined by Neal Stephenson in his 1992 novel “Snow Crash,” and the concept was further explored by Ernest Cline in his novel “Ready Player One.”

The future. Many people in tech believe the metaverse will herald an era in which our virtual lives will play as important a role as our physical realities. Some experts warn that it could still turn out to be a fad or even dangerous.

“We hand-held them and taught them everything, and then we launched the rocket on the LACMA campus,” Sachs said. The institution is in the process of figuring out future preservation of the NFT and the rocket.

If museums have tepidly embraced NFTs, art dealers have been racing ahead. Pace Gallery was an early adopter of the digital market, hiring the museum curator Christiana Ine-Kimba Boyle last spring to lead its online sales effort before introducing Pace Verso, its own platform dedicated to NFTs.

Art dealers and museums have long tried to woo Silicon Valley’s tech innovators as art aficionados. Pace was one of the first galleries to open there. Boyle said crypto collectors are often drawn to aesthetic flair. “What they are interested in is visuals,” Boyle said in an interview, adding that some seek the brilliant hues and cartoonish styles of what they’ve seen online.

Last year, the gallery helped artists like Lucas Samaras, Glenn Kaino and Urs Fischer release tokens. According to Boyle, the program has helped bring crypto investors and aspiring collectors like Felix Xu into the gallery’s orbit.

Xu purchased NFTs by Fischer and Samaras before asking questions about the artist Adam Pendleton, known for his large monochromatic and conceptual paintings.

But he remembers being the one giving some of the advice on how Pace might attract more NFT collectors for their traditional paintings and sculpture.

The NFT community, he said, is “looking for social engagement.” He suggested that Pace needed to learn how to “growth hack” its business model by starting community events, creating raffles, and offering merchandise, like free T-shirts — all techniques that drive buying frenzies in the NFT world.

For dealers looking for the next generation of art buyers, wooing NFT collectors like Xu are a long-term investment that might not continue to pay off. His taste is already evolving beyond the blue-chip artists in Pace’s inventory. “These days I actively look for emerging artists who carry on an avant-garde spirit and address critical real-life challenges.”

So will the marriage between NFTs and the art world last?

It’s already produced an unusual offspring. Over the last year, Erick Calderon has gone from running a ceramic tile business to becoming the tycoon of Art Blocks, an NFT platform that claims to have generated more than $100 million in digital sales in 2021. Calderon gained his fortune from his early investment in CryptoPunks and created the series Chromie Squiggles (one of which Xu bought for over $1,000 as his first NFT artwork). In August, another of Calderon’s squiggle resold for $2.5 million.

Calderon is using a portion of his fortune to build a collection of drawings by digital art pioneers like Vera Mólnar, Manfred Mohr and Herbert W. Franke. And in October, he opened an exhibition space for his company in Marfa, Texas, where the NFTs are presented like framed paintings on the wall. A recent town-hall meeting to explain Art Blocks became tense when traditional artists in attendance began questioning the NFT world.

Calderon said he remains positive about the possibility of a future where the NFT community and art world would coexist, and he was keen to continue buying more traditional art.

“I have said that I would trade my CryptoPunks for a Donald Judd or James Turrell,” he said half-jokingly. “But nobody has taken me up on that offer — yet.”

Spider-Man: Across the Spider-Verse Will Have a Totally Different Art Style for Every Dimension

Mon Feb 14 , 2022
Spider-Man: Across the Spider-Verse will lean into its eclectic mix of art styles with a different style for each dimension. During an interview with Collider, filmmakers Phil Lord and Chris Miller explained their “ambitious” approach to the Spider-Verse sequel. “It is, as Phil said, a very ambitious sequel because we […] 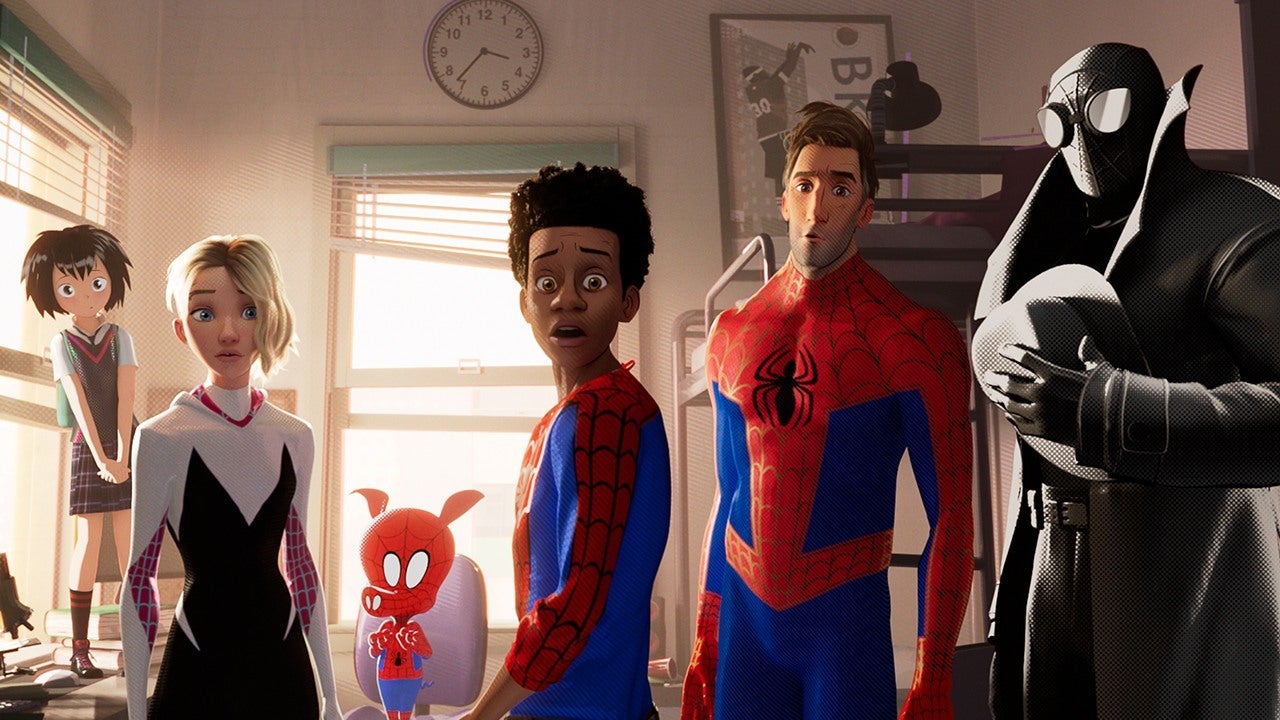