Art Industry News is a daily digest of the most consequential developments coming out of the art world and art market. Here’s what you need to know this Wednesday, March 23.

Superyachts Are the New Private Art Gallery – In an extremely niche form of service journalism, Robb Report explores how the ultra-rich can safely store and display their Basksys and Basquiats aboard their superyachts. Perhaps surprisingly, a yacht’s advanced AC system, humidity controls, and security can offer a suitable environment for fine art. Just don’t forget to ink a wide-ranging insurance policy, store paperwork on board for customs, and analyze the light conditions before installation. (Robb Report)

Wollongong Art Gallery Investigates a Late Donor’s Holocaust Links – The late Bronius “Bob” Sredersas, who donated 100 works to the institution in 1976 and has a gallery there named after him, could have been a Nazi collaborator before he moved from Lithuania to Australia in 1950. A former government official discovered Sredersas was a policeman before the war, and many policemen in Lithuania were responsible for killing during the Holocaust. The city’s council has agreed to investigate. (ABC News)

How Collectors Avoid Sanctions With Art – Sanctions sounds like a great way to squeeze Russia—but sometimes, the addition of a name to a list can only go so far. On a recent episode, the Daily podcast revisited the story of billionaire oligarch Arkady Rotenberg, who was sanctioned by the U.S. after Russia’s invasion of Crimea in 2014. Eight weeks later, he bought a $6 million painting in New York City. “The game becomes about hiding your name in order to continue to do business,” reporter Matt Apuzzo explained. It is easy for a sanctioned individual to continue to buy art and properties as long as he has a trusted middleman to create a shell company. “When you decide you want to buy a piece of art… that company buys that piece of art,” Apuzzo said, adding that art dealers don’t have enough incentives to find out who their clients are. (The Daily)

Filmmakers’ Lack of Interest in Art Movies Appalls John Waters – “What is shocking to me is that they’re not interested in art movies,” the ever-quotable filmmaker and visual artist told the New York Times ahead of the release of his debut novel, Liarmouth: A Feel-Bad Romance. “They want to go to a mall. They want to sit in stadium seating. They want special effects. I’m the minority here, obviously.” (New York Times)

Smithsonian Lists Potential Sites for New Museums – Twenty recommendations—including the Arts and Industries Building and the FBI headquarters—have been put forward as potential locations for the long-awaited National Museum of the American Latino and the American Women’s History Museum in Washington, D.C. A shortlist of six to seven will be announced this summer. (The Art Newspaper)

New York City Mayor Could Slash Culture Budget – The city’s Department of Cultural Affairs may receive a $72 million funding cut in the coming fiscal year should the budget proposed by Eric Adams be approved. The proposal seems to contradict the blueprint he released during his campaign, which included the creation of a “Culture at Risk” response team and a new cultural district on Governor’s Island. (Hyperallergic)

Burning Man Festival Opens In the U.K. Next Month – On April 9, “Radical Horizons: The Art of Burning Man” will open Chatsworth House, the ancient estate of the Duke of Devonshire in Derbyshire Dales. The free exhibition will feature 12 sculptures created by Burning Man artists dotted around the picturesque landscape. In a development that seems very 2022, the unusual alliance between the duke and the hippy arts festival was forged by Sotheby’s. (Guardian)

Berlin Artists Organize Auction to Support Ukrainian Refugees – Works by Eliza Douglas, Anne Imhof, Ólafur Eliasson, Cyprien Gaillard, Marc Brandenburg, Alicja Kwade, and Christine Sun Kim are among 33 pieces due to be sold online from April 1 to 10 by the Grisebach auction house in Berlin to raise funds for Ukrainian refugees as part of the “Artists for Ukraine” initiative. (Monopol)

Pipilotti Rist’s Installation Lights Up the National Museum of Qatar – Made of 12,000 LED lights, the Swiss artist’s immersive installation Your Brain to Me, My Brain to You is on view at the Doha museum until December 20. The Instagram-friendly display is designed to lure crowds flying in for the FIFA World Cup Qatar 2022, which is scheduled to take place from November 21 to December 18. (Press release)

Pipilotti Rist, Your Brain to Me, My Brain to You. Courtesy of Qatar Museums.

Thu Apr 14 , 2022
Netflix will let customers express a deeper affection for TV shows or movies that they love — not just like — with the launch of a new ratings option: two thumbs up. According to Netflix, the new feature will give the streamer a valuable signal into user preferences that will […] 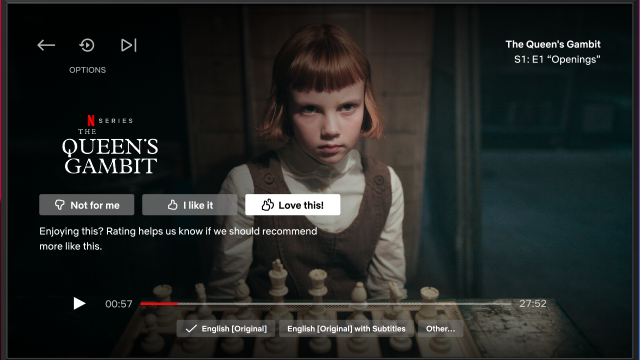