Glenn Beck is dressed comfortably — light-colored jeans and a T-shirt that reads “Love Thy Neighbor,” underneath a dress shirt left unbuttoned to add a hint of formality. This is Beck’s art show, which took place in Park City over the weekend, and the man of the hour dresses as he pleases.

Beck isn’t sporting a hat tonight, though he’s accustomed to wearing his many: radio host, author, controversial pundit. But don’t call him an artist. I made that mistake, and Beck was swift to correct me.

“I don’t consider myself an artist,” Beck says, as we stand in a room with two dozen of his original oil paintings flanking us.

This art thing, he says, is his new passion, a hobby he picked up early on in the pandemic. Beck struck a deal with Colby Larsen, owner of Park City Fine Art, a quaint gallery on Main Street, to display (and hopefully sell) a good number of Beck’s originals to support his charitable work. It’s around 4:30 p.m. on Friday, and though the doors don’t open until 5, a dozen or so people are already congregating outside.

Around the gallery are Beck’s paintings: original oil on canvas on the first floor, giclées on the second. For a self-described novice, the art is surprisingly impressive and of a wide variety. Every painting, it seems, is on par for Beck, the “history buff” — each is of some notable figure and tells a story with a specific message. And casual observers like this journalist need to do little work to decipher each piece’s meaning. Small placards to the side explain the messages: for a portrait of Teddy Roosevelt, he “epitomizes what we love about America,” then lists his attributes; for football coach Knute Rockne, “May we all remember, when the tide seems to be against us, to go out there with all we’ve got.”

I ask Beck which of all his paintings is his favorite, and he hesitates, his eyes darting around the room. He turns to the gargantuan frame behind us, a black-and-white boxing scene. “This one just has a special meaning to me,” he says.

I recognize it from his website. It’s a portrayal of a 1936 boxing match between Joe Louis and Max Schmeling. Louis, a Black American, lies crumpled on the ground as a referee stands above him; in the background, Schmeling — a Nazi favorite — celebrates.

I point out to Beck what seems obvious, with some hesitance — that the German won, not the American. “That’s the point,” Beck says, tapping my shoulder as he says the last word. “It’s called ‘Birth of a Champion.’”

Beck walks closer to the painting and starts explaining its details. They fought for 11 or 12 rounds, Beck says, and Louis was the favorite. But Schmeling scouted out Louis’ weakness, and he found a way to exploit it. (Beck lifts his fists in front of his face.) “Schmeling threw right jab after right jab” — Pow! Pow, Beck punches the air — “and wore him out.” The result? Pow! A huge upset, and Louis on the mat.

Beck walks closer. “Everybody tries to spin this as pro-Nazi. It’s not. It’s about what it takes to win.” The next time the two fought, he asks, do I know what happened? I don’t. Beck pops the air, his fist not far from my nose. “Louis knocked him out in 90 seconds.”

We move on to a pair of paintings on the front wall depicting Christ: one with Jesus as a prisoner in Mao’s China, and another with the Savior in a Nazi concentration camp. “I really wrestled, the last six months, whether I was gonna expose these at all,” Beck tells me. He points to the one of Christ, head bowed, with a sign around his neck that says “SON OF GOD,” written in Mandarin.

“We have a problem,” Beck says. “We don’t look at the ugly things that man does to each other. We’re still buying iPhones.” I slowly slide my iPhone, which is sitting in my hand, under my notepad. “Like, China, really? With what they’re doing to the Uyghurs?”

The moral, as Beck explains it: Christ is always where the suffering occurs.

The painting to the right, a depiction of Jesus as a 20th-century Jew, is jarring. Jesus’ eyes are sunken, his cheekbones protruded; he wears a thorn crown, almost mimicking the jagged silhouette of barbed wire in the background. On his chest is a purple star and a number.

Beck pulls out a large, metal briefcase and begins rummaging through its contents. He’s a collector of American artifacts, he says, and that appears to be an understatement. He pulls out the key to Lincoln’s box at Ford’s Theater — nope, not that one — and then the Presidential Medal of Honor awarded to Chief Iron Tail — no, not that, either. He finally finds it — a blue binder with the Star of David stamped on the front — and flips through. “The Holocaust is extraordinarily personal to me,” he says, “so I have quite an extensive collection on the bad guys.”

He lands on a page with a piece of purple fabric, cut out from a prisoner’s jumpsuit. “That,” he says, tapping it, “is the inspiration for that.” It’s the same mark he painted on Jesus, denoting that this Holocaust victim is clergy by trade.

“If Jesus Christ came at that time in Germany, that’s where he would’ve ended up,” Beck says. “Would we have noticed? Would we have seen it?”

I ask what Jews will think of this painting. Beck’s been in hot water with the Jewish community before, including after comparing Al Gore’s climate plan to the Holocaust. Beck is careful in his response. “I’m guessing not well,” he says. “The knee-jerk reaction will be, ‘How dare you?’” Beck then launches his defense: “I have a lot of Jewish friends, a lot of Jewish rabbi friends. I actually have a rabbi that teaches me scriptures in Hebrew, who’s a dear friend.”

Beck’s built a career off stoking and storming through controversy, and this painting is no different. But aside from his representations of Christ, his artwork is rather noncontroversial and surprisingly apolitical. He paints cowboys and baseball players and a race-neutral Lady Liberty. “I don’t want to make (my art) about politics,” Beck tells me. “This history counts to all of us.”

A surprising message from one of America’s most provocative pundits. But don’t call him just a pundit, either. “I do many jobs,” he tells me. “The one I’m most known for is political. But that’s not all who I am. And people miss that message.”

Beck, who is full of surprises tonight, also tells me that he’s “not a Republican. I used to be Ronald Reagan Republican. I don’t really like today’s Republicans that much.”

Our time for a personal tour nears its end, and guests start streaming through the entrance. When one woman sees Beck, she starts clapping, giddily, and others join in. Beck approaches and shakes a few hands, then a few more, then a man in the back forces his way to the front so he, too, can have his turn.

One family came all the way from Idaho. Another woman lives in Utah now, but recently “fled” New York during the pandemic. (“Bless you,” Beck responds.) One couple from Cottonwood Heights, Utah, tells me they’ve been listening to Beck for 16 years. The wife didn’t like him at first but one day she was sold. “Glenn said, ‘Don’t believe anything I say. Don’t believe anything I say, and do your own research.’ And I did.” She paused, smiling. “And I found he’s right about everything.” Most who’ve listened to political talk radio recognize being “right” is fairly relative.

Beck offers his RSVP-only guests — about 35 in number — a brief explanation of each painting, using mementos from his silver chest as props. They ooh at the key to Lincoln’s box; they ahh at other items. But the crowd’s favorite moment is when Beck explains his Rockne painting, “When the Team is Up Against It.” Beck gives his own pep talk: “When you’re feeling beat up and like you don’t have a chance to win, who cares? Get back in and give it all up.”

Americans today have forgotten this, he says. “The shortages of everything are driving me nuts. You want to fix it? Unleash the American people and tell them that,” he says, pointing at his painting. The audience erupts in applause.

Beck’s assistant gives him a signal to wrap up, and Beck thanks his guests. Three dozen more people are anxiously awaiting their turns outside the gallery, and they shuffle in as the current group exits. Countless more guests will get a shot to see Beck’s art show in Austin, Texas, this November, then back in Park City next summer, then Austin next fall, and on and on, until the paintings stop selling or Beck stops painting. But Beck, the artist, doesn’t seem to be leaving the game anytime soon. Coach Rockne wouldn’t like that.

How NFTs Are Pioneering Digital Arts For The Entertainment Industry 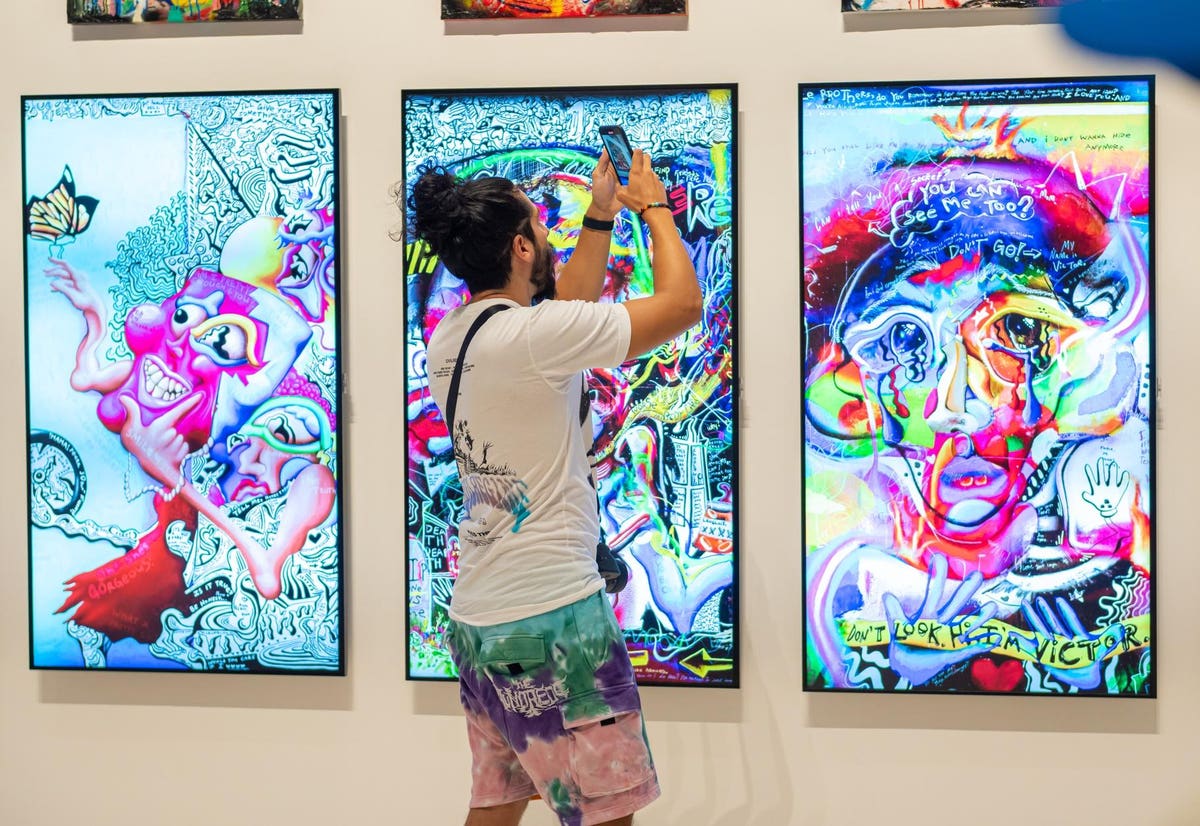